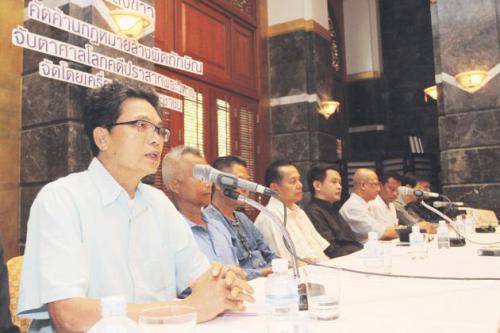 
Plan for huge rally against amnesty bill
Thye Nation / Phuket Gazette
PHUKET: A massive rally is apparently in the making now as several groups have expressed the shared goal of fighting any move to “whitewash” former PM Thaksin Shinawatra to the bitter end.

The Democrat Party has also reaffirmed its plan to take to the streets if it fails to block the amnesty law in the Parliament.

“We have never changed our stance. It’s our duty to fight against the amnesty law,” the party’s leader Abhisit Vejjajiva said yesterday.

Democrat MP Nipit Intarasombat also urged opponents of the amnesty bill to start coming together, saying on his Facebook page that the bill’s third reading would happen very soon.

Last Friday, the House ad-hoc committee for the amnesty bill caused a stir when it voted to include people facing legal action in cases stemming from post-2006 coup investigations among those who would benefit from the law.

Initially, the bill sought to pardon only political demonstrators.

“Thaksin won’t be the only beneficiary,” the committee’s chairman and Pheu Thai MP Samart Kaewmechai said yesterday. “We don’t mention the return of his assets either.”

Still, Abhisit commented that the change to the core of the bill showed an intention to favour ousted prime minister Thaksin and his cronies.

Two years after the 2006 military coup removed Thaksin from power, he was found guilty of abuse of authority. The former premier fled overseas just before the ruling was announced and now lives in self-imposed exile to avoid a two-year jail term but assets of Bt46 billion were confiscated in a later ruling in early 2010.

Abhisit said if the amnesty bill sailed through and took effect, Thaksin would definitely try to get back that money. “If he reclaims that amount of money, it means Thai people lose the money to the corrupt,” he said.

Abhisit expressed an intention to try to block the amnesty bill in the Parliament, where the government has a comfortable majority, and to also ask the Constitutional Court to block the bill – before going all out with a protest on the streets.

Meanwhile, the People’s Assembly Reform Thailand (PART) convened a meeting yesterday with various civic groups to discuss several developments and address their concerns, especially about the apparent move to issue a blanket amnesty.

Most had the opinion that a blanket amnesty would effectively let Thaksin off the hook, as it was likely to undermine the legal basis under which he was convicted.

“If some Democrat MPs would like to join our activities, they can do so under their own name,” PART chairman Somkiat Pongpaiboon said.

He said the PART local leaders from 77 provinces would have a meeting on October 27 to plan their big move.

“Anyone who wishes to join us can come forward,” Somkiat said.

Green Politics co-ordinator Suriyasai Katasila showed up alongside Somkiat yesterday. “We have shared the stance against the issuing of an amnesty for Thaksin,” he said.

Nitithorn Lamlua, an adviser to the Network of Students and People for Thailand’s Reform, said the network was willing to join the protest against the amnesty bill. “We have seen the amnesty bill as the step towards dictatorship, [and] an infringement on the judiciary.”

The network is leading an anti-government rally at the Urupong Intersection. Thaksin is seen by many as the de facto head of the current government, which is led by his younger sister, Prime Minister Yingluck Shinawatra.

General Preecha Iamsuphan, a leader of the People’s Army Against the Thaksin Regime, called on people to come forward and stop Thaksin’s regime from taking over Thailand.

Nipit believed the Parliament would start the third reading of the amnesty bill on November 6, the day he believed opponents of the bill should start a massive rally.

Some red shirts are also unhappy with the amnesty bill, because they wanted those behind the bloody dispersal of red-shirt demonstrators in 2010 to face justice.

Meanwhile, most people see that the amnesty bill, which is being vetted by a special House panel, would become a cause of political violence, a survey by Abac Poll of Assumption University has found.

Abac Poll said 80.3 per cent of respondents said yes when asked whether they think the bill was be a cause of political violence, while 19.7 per cent did not think so. The survey was conducted from October 15 to 19 among 1,488 respondents.


Critics of Pattaya landfill plan say encroachment is real problem
The Nation / Phuket Gazette
PHUKET: Like other coastal cities, Pattaya is losing parts of its majestic beach to erosion at the rate of one metre every monsoon season.

A massive landfill project, to cost the central government Bt450 million, is planned to restore the city’s 2.7-kilometre beach to its former glory. About 50 years ago, Pattaya boasted 35 metres of beachfront, but presently, sandy areas are less than five metres in width during high tide. Under the project, tonnes of sand would be transported to the beachfront to restore the condition of the city’s North, Central and South Pattaya beaches.

Pattaya Deputy Mayor Ronakit Ekasingh was optimistic that the landfill project was a sustainable solution for keeping the beachfront in pristine condition. He said the area would first undergo an environmental impact assessment (EIA) under the supervision of the Marine Department.

The city has already spent Bt16 million in emergency funds to check the 29-metre erosion of North Pattaya beach. Hundreds of giant sandbags line the beach.

The idea of a landfill to counter coastal erosion was first conceived in 1994. The Pattaya Bay Area, one of Asia’s largest beach resort areas, appeals to both local and foreign travellers, each year attracting about 10 million visitors.

Over the past four years, Pattaya’s city administration and Chulalongkorn University have been working together to develop the project into a workable solution.

Chulalongkorn researcher Thanawat Jarupongsakul said the new landfill in Pattaya would be the first of its kind in Thailand. Should the project prove a success, it would be emulated in Hua Hin and coastal areas in the South, Thanawat said.

The Pattaya landfill, he said, would need over 360,000 cubic metres of sand and would take over eight months to complete. Barriers in the sea would have to be constructed 15 metres high to create a buffer zone and protect the 100-metre stretch of beach, before the sand to enlarge the beachfront could be introduced. The process would have to be repeated again in about 10 to 14 years to ensure the condition of the beach was maintained.

In a similar beachfront landfill in Germany, the landfill lasted 20 years before it had to be replaced, said Thanawat, adding that Thai contractors did not have the know-how to produce the kind of landfill needed, which could affect its longevity.

A simulated study indicated that as much as 10 metres of a beachfront landfill is washed away in the first year. According to Thanawat, the sand lost each year would have to be replaced for three years running, before the sand settled and the width of the beachfront remained naturally stable.

Conservationists have warned that a landfill might not be easy to implement in the face of strong winds, storms a