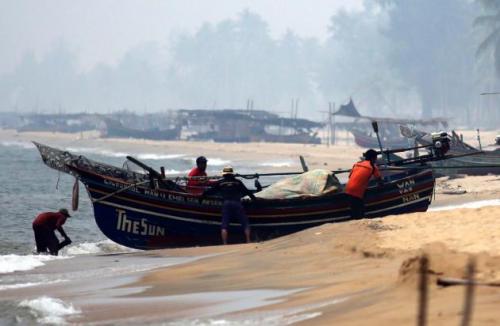 Meanwhile, Pollution Control Department deputy chief Araya Nanthaphothidet is scheduled to preside over a meeting of relevant officials in Songkhla today to discuss the impact of the forest-fire smoke.

Environment Region 16 Office director Halem Jehmarikan said Narathiwat’s airborne particulate-matter level rose from 104 micrograms/cubic metre on Monday to 129 yesterday, a level that can affect people’s health and respiratory systems. He advised residents to wear face masks when going out and to avoid exercising outdoors. He warned that the elderly and children, as well as those with heart disease and asthma, were especially vulnerable to health risks from the air pollution.

Songkhla’s devices for measuring air quality were damaged by lightning strikes in Hat Yai district a few days ago, which meant no report on particulate levels was available for the province, said Halem. New devices would be sent to Hat Yai and Satun this Friday, he added.


BRN wants troops removed
The Nation / Phuket Gazette
PHUKET: Thailand’s peace dialogue with the Barisan Revolusi Nacional (BRN) has reached another tumultuous stage after the BRN posted new demands – including the withdrawal of most troops from the southernmost region ahead of Ramadan – via YouTube on Monday.

However, most observers say it would be near impossible for the government to accept and proceed with the demands.

Hassan Taib, who usually represents BRN in the peace dialogue, has demanded that Prime Minister Yingluck Shinawatra officially accept the demands by July 3. He has also threatened to never return to the negotiation table if the government chooses not to present his demands to the Parliament.

“It’s not possible for the Thai prime minister to sign the acceptance of the demands based on just what Taib says,” Justice for Peace Foundation’s chairperson Angkhana Neelapaijit said yesterday.

She also ruled out the possibility of the demands being put before the Parliament immediately.

“Before any issue reaches the Parliament, it must be carefully studied,” she said.

Nimu Makajay, a specialist on the Muslim community, believes the latest demands from Taib were a threat to the ongoing peace dialogue.

Though National Security Council’s secretary-general Paradorn Pattanatabutr began peace talks with the BRN in March, the violence in the deep South has not eased.

Move seen as a way to avoid responsibility

Prasit Meksuwan, who previously sat on the National Reconciliation Commission, suspected that the BRN was in fact unable to control each and every insurgent group in the region.

“Some are not affiliated with the BRN,” he said, adding that Taib had perhaps presented the latest demands in a bid to find a way out.

“Then, the BRN can claim that violent incidents are continuing because the government is not heeding their demands,” Prasit said.

Dr Panitan Wattanayagorn, a security expert at the Chulalongkorn University, also believed that Taib might be looking for an exit strategy – an opinion that was shared by Democrat MP Phirayot Rahimmula.

“I think the BRN just wants to avoid having to accede to its agreement that the violence will ease during Ramadan,” Panitan said, adding that the latest demands were difficult to accept, and even if the government agreed to them, the process would take time.

Panitan believes the government should delay going to the next round of negotiations with BRN and set up a small team to talk directly to armed groups active in the deep South.

“We have a list of armed groups. To date, we have tried to surround and arrest their members. Now, let’s see if the authorities can talk to them,” he said.

Meanwhile, Deputy Prime Minister Chalerm Yoobamrung said he would certainly not respond to the BRN’s demand for the withdrawal of most troops from the South, adding that the government was thinking about talking to other groups too, not just BRN.

Door to talks ‘will not be shut’

Defence Minister Sukampol Suwannathat said he would not accept the demands because they were unjust and insincere, though the door to peace talks will not be shut.

“If the other side still wishes to talk, the peace dialogue will continue,” Sukampol said. “If it doesn’t want to talk anymore, that’s fine too. We will find other ways to restore peace in the South”.

Paradorn, meanwhile, said based on the peace dialogue, the BRN would have to submit its official demands via Malaysia as all three rounds of negotiations took place in the neighbouring country.

“Malaysia, as the facilitator of the peace dialogue, has yet to forward the demands to us. It remains to be seen whether the official ones are the same as what we have seen on YouTube,” he said.

Paradorn said the authorities would have to respond to the needs of people, not just a specific group. “We have listened to the opinions of locals and we have not noticed any wish for the soldiers to pull out.”

Removed from the “Public Statement” means Thailand is no longer on the list of countries at risk of money laundering by terrorist groups. Included on the list, countries could face sanctions by FATF member countries which could affect cross-border business and financial transactions.

Thailand has improved the compliance by a number of actions including the issuance of ministerial regulations on cash threshold transactions. FATF also required member countries to adequately criminalising terrorist financing and establishing and implementing adequate procedures to identify and freeze terrorist assets.

According to Sihanart, during the discussion in Norway, Thailand was urged to raise awareness on legal enforcement among all parties, as some non-financial business operators still lack understanding in the counter-terrorist financing standards. AMLO is also urged to impose penalties on blacklisted individuals.