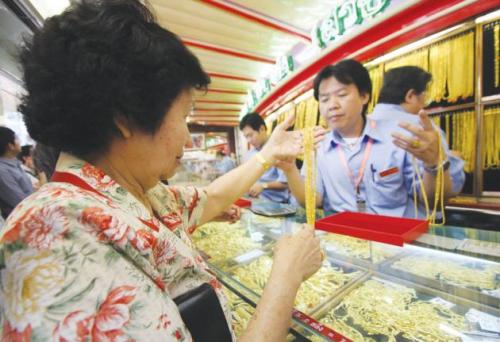 
New gold rush as prices plummet
The Nation / Phuket Gazette
PHUKET: Savers nationwide are flocking to gold shops, enticed by the falling price of the precious metal, which yesterday tumbled to a 34-month low amid fears of an end to the US quantitative easing policy.

Wisawa Wisawachaiwat, the owner of Jongluck Gold Shop in Phitsanulok, said the recent plunge had sparked new interest among small savers. “The prices have fallen to the lowest in years and they are expecting huge profits once the prices climb up again,” he said. Some clients took home gold bars worth 50-100 in baht weight.

The precious metal yesterday extended the decline to a 34-month low amid speculation that the US Federal Reserve will reduce stimulus with economic data beating estimates. Held as a safe bet against inflation, gold lost value as unprecedented money printing by central banks around the world failed to spur inflation.

A lack of accelerating inflation and concerns about the strength of the global economy is also hurting silver, platinum and palladium, which are used more in industry.

Bullion has slid 28 per cent this year, set for the biggest annual drop since 1981, after rallying for the past 12 years. About US$62.4 billion was wiped off the value of precious metals exchange-traded product holdings this year as some investors lost faith in them as a store of value.

While gold bullion slid to $1,180.50 an ounce early yesterday in Singapore, the lowest since August 2010, gold prices in Thailand followed the move. Local gold prices were adjusted 15 times yesterday in line with global volatility. At 5pm, gold bar was sold at Bt17,850 while ornaments were at Bt18,250 per baht weight.

Jitti Tangsitpakdi, president of Gold Traders’ Association of Thailand, believed that gold prices could decline further but would not fall below $1,100 per ounce. Cheap prices should spur new demand and the local prices could be cheaper if the baht does not weaken further against the US dollar.

Christin Tuxen, a senior analyst at Danske Bank in Copenhagen, who sees gold at $1,000 in three months, said: “The current environment is a fundamentally poisonous one for the yellow metal. Rising yields are upping the opportunity cost of holding gold, the initiation of a fundamental dollar up-trend weighs, inflation expectations are in decline as the commodities super-cycle wears off, and many tail risks have been sidelined.”

“There’re still people who are interested in gold but because prices have fallen so much and so rapidly, they’ll wait for some stabilisation,” said Alexandra Knight, an economist at National Australia Bank. “There’s definitely been a loss of confidence in gold and that’s seen in the ETF liquidations.”

“If our forests remain open for lease, then they will come to an end,” the foundation’s chairperson Rataya Chantian told a seminar.

Held by Kasetsart University’s Faculty of Forestry, the seminar addressed conflicts between development and conservation policies and on whether resorts encroaching into national parks should be dismantled or allowed to stay open through a new legal framework.

“Some people in society are concerned about policies that are geared towards the use of forestland more than ever before,” Kwanchai Duangsathaporn said in his capacity as deputy director of the faculty’s Forest Research Centre.

“When those resorts were dismantled, farmers had to go somewhere else to sell their fruits.

“Many people lost their jobs and had to find new employment. More than 60 students had to quit school in order to relocate with their parents,” Samer said.

Asst Prof Wanchai Arunpraparut, dean of the faculty, said that though these illegal resorts boosted tourism and the local economy, their presence ran against the country’s principle of forest conservation.

Annop Chaipornthanarat, an academic at the Forest Department, said the government should have clear-cut policies.

“I don’t want to see confusing policies,” he said.

Not long after the crackdown on illegal resorts in the Wang Nam Kheow National Park was carried out, relevant authorities have talked about making these resort operators legal tenants.

“I stick to the principle of suitability,” she said. “The government has run the country for almost two years, so it is reasonable to expect a Cabinet reshuffle.”

Deputy Government Spokesman Pakdiharn Himathongkham said that among the new Cabinet appointees were “capable people” who had served as government ministers in the government of Yingluck’s elder brother Thaksin Shinawatra. He said their participation in the current government would help boost its efficiency. “It’s like giving a ‘magic touch’ to the new Cabinet,” he added.

In response to a remark by opposition leader Abhisit Vejjajiva that the prime minister should stop Thaksin’s influence in government affairs, Pakdiharn said it appeared the Democrat Party leader was “envious”.

Another Deputy Government Spokesperson, Sunisa Lertpakawat, also countered Democrat Party criticism of the potential Cabinet line-up yesterday. She said it was merely based on media speculation and not on the official Cabinet line-up, which would be endorsed by His Majesty the King.

Sunisa also rejected allegations by the Democrats that the prime minister would double as defence minister in a bid to interfere with the military’s transfers of senior commanders in the armed forces. She said the Defence Ministry Administration Act, issued by the post-coup government in 2008, prevents politicians from interfering with transfers of high-ranking military officials.

Deputy Interior Minister Chatt Kuldiloke, who is likely to be replaced in the latest Cabinet shake-up, said yesterday that he would take a long rest. A retired police commander, he pointed out that he had been serving the country for many years. He turned 70 this year.