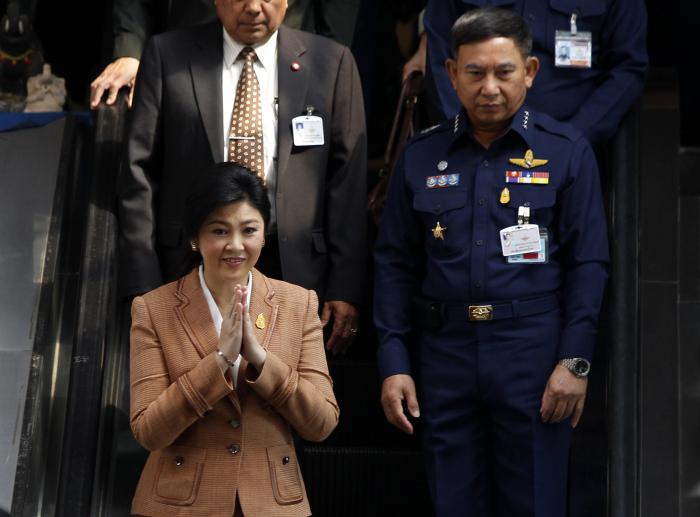 PHUKET: Thailand’s Constitutional Court on Friday nullified a February 2 general election in a ruling that will further delay the formation of a new government after months of street protests aimed at bringing down Prime Minister Yingluck Shinawatra.

The court said the vote did not take place on the same day across the country and that violated a clause in the constitution.

Polling was disrupted by protesters in around a fifth of constituencies, leaving the House of Representatives without a quorum to convene and select a new prime minister.

It was unclear when a new vote would be held.

PHUKET: Officials of the Government Lottery Office were abruptly sent home on Friday after Luangpu Buddha Issara led farmers on a siege of their office.

The monk demanded that the GLO use money raised from lottery sales to buy 100 tonnes of rice from farmers or at least fix the results of the next lottery draw.

The monk said the GLO must fix the first prize of the next lottery draw to be the license plate number of a truck carrying the rice if GLO refused to buy the rice.

After failing to get an answer, the monk had the rice dumped in front of the GLO and surrounded all gates. GLO workers then stopped working and returned home.

The monk led a procession of trucks, vans and farm trucks with 100 tonnes of rice from the Chaeng Wattana rally site at 9 am.

The GLO chief legal officer Winai Wutthidet to come out to negotiate with the monk. Winai told Luangpu Buddha Issara that GLO Director Atthakij Thareechat was absent on a foreign trip. Winai promised to raise the farmers’ demands with the GLO board of directors.

The monk however ordered the trucks to dump rice in front of the office immediately and vowed to continue to rally there until the demand is met.

PHUKET: Grenades were thrown at two houses near the residence of a charter court judge late last night, seriously injuring one man and damaging the house.

The houses were in a congested community on Ekamai Soi 30 and were damaged by the explosions.

The first grenade was hurled over the roof of a house and plunged into a bedroom, injuring Boonchuay Pimsamrit, 42, who was sleeping. The second explosive was thrown into an adjacent house but no one was inside.

Police said Ekamai 30 is connected to Soi Pridi Panomyong where the residence of Constitutional Court judge Charan Pakdithanakul is located. Police would not say if the explosions were an attempt to intimidate Judge Charan.

The Constitutional Court gave its ruling on the validity of the Feb 2 general election today following a petition by a university academic, seeking to nullify the nationwide poll.

Each charter judge verbally gave his individual statement on the case, followed by a verdict later in the day.

Meanwhile, a hail of bullets were fired at the Pheu Thai Party’s coordinating centre of red shirt leader Suporn Attawong in Nakhon Ratchasima. There were no casualties.