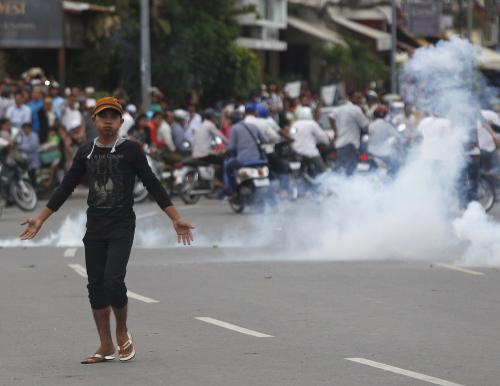 
Cambodian police unleash teargas, water cannons on poll protesters
Reuters / Phuket Gazette
PHUKET: Police fired teargas and water cannons to disperse hundreds of demonstrators who had rallied in Cambodia’s capital on Sunday to push for an independent investigation into a July election they say was fixed to favour the ruling party.

The clash came amid tension heightened by the discoveryof a bomb and some grenades around the city on Friday and risk escalating asix-week standoff that has become one of the biggest tests of Prime Minister Hun Sen’s three decades in power.

His Cambodian People’s Party (CPP) won the election with 68 seats to the Cambodia National Rescue Party’s 55, a greatly reduced majority that signals dissatisfaction with his rule despite rapid economic growth in a country that for decades was seen as a failed state.

But the Cambodia National Rescue Party (CNRP) and itssupporters insist they won the July 28 vote and on Sunday they held theirsecond mass rally in eight days to demand an independent investigation intotheir complaints of vote fraud.

The government has refused to allow that.

“Our vote is our life,” CNRP’s deputypresident, Kem Sokha, told about 20,000 supporters at Freedom Park, where theprotest took place.

Refusing to give up

The clashes late in the afternoon left several peoplewith minor wounds but raised tension to a new level. Police threatened legalaction and put razor-wire fences and fire trucks across several roads aroundthe capital in a failed bid to stop demonstrators from marching to the rally.

Talks between the two parties have gone nowhere and ameeting on Saturday at the Royal Palace between King Norodom Sihamoni, Hun Senand CNRP leader Sam Rainsy resulted in no breakthrough.

The CNRP and CPP were scheduled to resume talks on Mondayeven though the opposition has vowed to hold protests on both Monday andTuesday.

The CNRP is refusing to give up until the governmentagrees to let outsiders conduct an investigation, but the opposition is runningout of options.

It plans to try to paralyse the legislature by boycottingparliament when it holds its first session on September 23, arguing that it wascheated out of 2.3 million votes to keep Hun Sen and his party in office foranother five years.

The government and the National Election Commission,which former finance minister Sam Rainsy accuses of collusion, are bothstanding by the official result and the Constitutional Council ruled on Fridaythat all allegations of foul play had been investigated already and no newinvestigation was needed.

Hun Sen, 61, has taken credit with steering Cambodia awayfrom its chaotic past towards economic growth and development, but many urbanyouth born after the Khmer Rouge “Killing Fields” rule from 1975 to1979 see little appeal in his iron-fisted approach.

Hun Sen and his party are not known for compromising oneither domestic or international disputes and few people expect the governmentto bow to the opposition pressure.

“The CPP won’t agree to anything we demand,”said CNRP supporter Ngor Lay from the southern province of Kandal. “Theyjust love power and they have the courts in their hands.”

As President Bashar al-Assad’s war planes and artillery hit rebel suburbs of the capital again on Sunday, minister Ali Haidar toldMoscow’s RIA news agency: “These agreements … are a victory for Syria, achieved thanks to our Russian friends.”

Though not close to Assad, Ali was the first Syrian official to react to Saturday’s deal struck in Geneva by U.S. Secretary of State John Kerry and Russian Foreign Minister Sergei Lavrov. Bridging an angry East-West rift over Syria, they agreed to back a nine-month U.N. programme todestroy Assad’s chemical arsenal.

Kerry responded to widespread scepticism about the feasibility of the plan by saying in Israel that it had “the fullability” to remove all Syria’s chemical weapons.

The agreement has effectively put off the threat of airstrikes Obama made after poison gas killed hundreds of Syrian civilians onAugust 21, although he stressed that force remains an option if Assad reneges -and U.S. forces remain in position.

Obama embraced the disarmament proposal put forward lastweek by Russian President Vladimir Putin after his plan for U.S. militaryaction hit resistance in Congress. Lawmakers feared an open-ended newentanglement in the Middle East and were troubled by the presence of al Qaedafollowers among Assad’s opponents.

In an interview with ABC television, Obama said criticismof his quick-changing tactics on Syria was about style rather than substance.And while welcoming Putin’s willingness to press his “client, the Assadregime” to disarm, he also chided the Kremlin leader for suggesting rebelscarried out the gas attack.

Defending his changes of tack on Syria, Obama said:”Folks here in Washington like to grade on style … Had we rolled outsomething that was very smooth and disciplined and linear, they would havegraded it well – even if it was a disastrous policy.”

National reconciliation minister Ali said Syria welcomedthe terms of the U.S.-Russia deal: “They will help Syrians get out of thecrisis,” he said. “They have prevented a war against Syria by denyinga pretext to those who wanted to unleash it.”

He also echoed Kerry and Lavrov in saying it might helpSyrians “sit round one table to settle their internal problems”.

But rebels, calling the international focus on poison gasa sideshow, have dismissed talk the arms pact might herald peace talks and saidAssad has stepped up an offensive with ordinary weaponry now that the threat ofU.S. air strikes has receded.

International responses to the accord were also guarded.Western governments, wary of Assad and familiar with the years frustrated U.N.weapons inspectors spent in Saddam Hussein’s Iraq, noted the huge technicaldifficulties in destroying one of the world’s biggest chemical arsenals in themidst of civil war.

Assad’s key sponsor Iran hailed a U.S. retreat from”extremist behaviour” and welcomed its “rationality”.Israel, worried that U.S. leniency toward Assad may encourage Tehran to developnuclear arms, said the deal would be judged on results.

China, which like Russia opposes U.S. readiness to useforce in other sovereign states, was glad of the renewed role for the UnitedNations Security Council, where Beijing too has a veto.

The Syrian government has formally told the UnitedNations it will adhere to a treaty banning chemical weapons. The U.S.-Russianframework agreement calls for the U.N. to enforce the removal of existingstockpiles by the middle of next year.