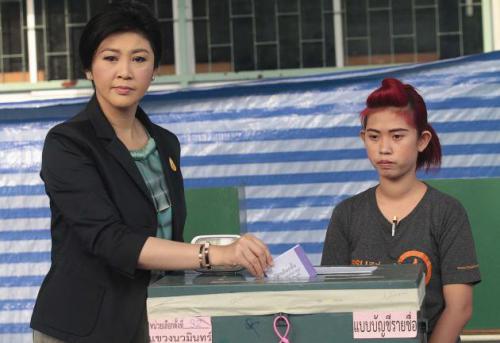 Doubt over poll outcomeThe Nation / Phuket GazettePHUKET: Despite the government’s claim of “victory” after voting was conducted in 89 per cent of the country’s 375 constituencies yesterday, many factors point to the high likelihood that this election – marred by boycotts and a long rowdy protest – could end up being declared void.

There were reports of a high number of “no votes” in many provinces, as eligible voters ticked the box at the bottom of the ballot paper to vote for “none of the above”. No votes were mostly in Bangkok and urban areas of the provinces.

Voting could be held without problems in 59 provinces, at 83,669 out of all 93,952 polling stations, according to EC secretary-general Puchong Nutrawong. The EC would unveil the voter turnout figure today, he said.

EC members will convene a meeting today to discuss ways to solve the election-related problems. EC member Somchai Srisuthiyakorn also is scheduled to meet this afternoon with Labour Minister Chalerm Yoobamrung, who is in charge of the government’s Centre for Maintaining Peace and Order.

An estimated 12 million people, or 25 per cent of all 48.7 million eligible voters, have failed to cast ballots – two million during advance voting on January 26 and another 10 million yesterday, according to an Election Commission (EC) official.

However, Somchai later said between 8 and 10 million eligible voters have been unable to cast their votes in more than 10,000 polling stations where voting was disrupted.

Traffic Police yesterday reported few cars and no congestion in Bangkok, which was unusual for a voting day.

In Bangkok, voting was successful in about 92 per cent of the polling stations, the EC said.

Caretaker Prime Minister Yingluck Shinawatra said after the voting closed yesterday that she was satisfied the election could be completed without violence. She thanked voters for “helping to maintain democracy” and thanked officials involved in holding the election and providing security at polling booths.

Suthep Thaugsuban, leader of the ongoing anti-government protest, said yesterday that it was the “first time to have so many eligible voters boycotting an election”. His People’s Democratic Reform Committee campaigned for no voting before political reform.

The EC said an announcement of election results has been postponed because of problems including the blocking of advance voting and the failure to hold voting in many seats.

“Today, we cannot announce the overall results of the election,” EC chairman Supachai Somcharoen said in a TV broadcast.

The snap election went off without violence, as many had worried, with voters in 306 of 375 constituencies able to cast ballots.

The EC could not declare the results until “advance voting” is completed. Some of the absentee polling held on January 26 was revoked after the anti-government protesters blocked polling stations. Advance voting has been postponed till February 23, but the EC has yet to schedule new voting.

Results for 125 MP seats in the party-list system of proportional representation will not be available until voting in all constituencies.

Some politicians from the opposition Democrat Party have petitioned the Ombudsman’s Office for the poll to be declared void, citing the fact voting is not organised on the same day, as required by law.

Although the EC could not give results, Chalerm claimed that Pheu Thai Party expected to win 265 to 280 MP seats.

The PDRC will close its Lat Phrao and Victory Monument protest sites and move to Lumpini Park today due to security concerns, following repeated gunfire and blast attacks by unknown assailants.

But the election went smoothly in the north and the northeast, the solid political support bases of the Yingluck Shinawatra-led government, which called the snap election.

The anti-government People’s Democratic Reform Committee (PDRC), which is led by Suthep Thaugsuban, has called on its supporters to press for political reform before an election is held.

A huge number of southern residents have thrown their support behind the PDRC, with many of them turning out in full force to thwart the snap election in their home provinces.

The south is also a stronghold of the Democrat Party, which boycotted yesterday’s election.

In Songkhla, the PDRC members have surrounded the Hat Yai Post Office for days to block distribution of ballots and ballot boxes. Without these tools, polling stations could not open in many southern provinces yesterday.

In most provinces in the region, no officials turned out to man the polling stations anyway.

Some polling stations shut down in the presence of protesting PDRC members, who showed up nearby.

No party-list ballots were cast at any of the southern polling stations that managed to open yesterday, because the papers had been blocked from distribution at the Hat Yai Post Office.

The PDRC members in Surat Thani declared victory after the EC officially announced yesterday that no voting would take place in their hometown.

In Songkhla, many PDRC protesters erupted in joy for the same reason.

In Trang, a local leader of the PDRC vowed to continue pressuring the government. “We will neither stop nor back down,” Saksarit Sriprasart said.

The PDRC has been pushing for the establishment of a “People’s Council” to implement reform in the country. It says this will prevent ill-intentioned politicians from hurting the country. According to the PDRC, the election will be held after the reform.

Yingluck called the House dissolution late last year in the face of massive protests, which have gained momentum since the Lower House’s pre-dawn move to pass the controversial amnesty bill.

Despite continued pressure from the PDRC ever since, her administration has insisted that the general election is a means to

Phuket Gazette Thailand News: Election Special – How did we end up here? From Thaksin to today