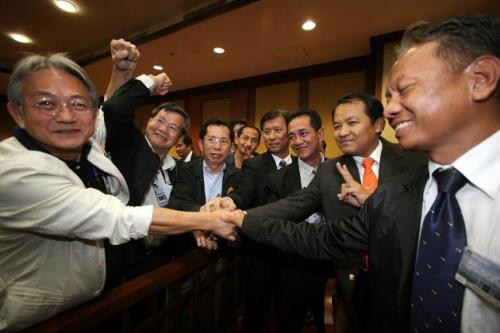 
Court orders studies on water plan
The Nation / Phuket Gazette
PHUKET: The government is mobilising legal advice on how to unlock projects under the Bt350-billion water-management scheme after the Central Administrative Court yesterday ordered complete environmental and health impact assessment reports on projects likely to harm the environment or communities.

PM’s Office Ministry permanent secretary Tongthong Chandrangsu said that after discussions with its legal team today, the government would be able to tell private companies that won bids under the scheme, as well as the general public, how it will proceed with the investment. An option to appeal will also be discussed.

“The court’s order that public hearings be conducted is what the government intends to do. On the EIAs and HEIAs, we will need to look into legal technicalities thoroughly before making the next move,” he said. “As far as I know, not all projects would be affected, as some can proceed without the reports.”

The court yesterday ordered the government to conduct EIAs and HEIAs before signing contracts with the winning bidders in its Bt350-billion water- and flood-management scheme. The government originally planned to sign the contracts in September.

The Stop Global Warming Association, which brought the case to the court, will today file a petition with the National Anti-Corruption Commission (NACC) against Yingluck and Tongthong for violating the Constitution in their implementation of the water mega-project.

“The court clearly said the government failed to comply with the Constitution’s Articles 57 (2) and 67 (2), which require the government to conduct EIAs and HEIAs before implementing its scheme. The projects will have severe impacts on local people and communities,” association president Srisuwan Janya said after the verdict was read.

“Yingluck and her PM’s Office permanent secretary must take responsibility for this mistake,” he added.

Srisuwan said yesterday if the government appeals to case to the Supreme Administrative Court, he would ask the court to issue an injunction ordering it to follow the lower court’s verdict, such as by completing public hearings and EIA and HEIA reports first.

He said not running the report was a precaution because the news item remained unclear and could lead to lawsuits.

Meanwhile a K-water executive, flying directly from South Korea, would clarify this afternoon about the company’s financial status following concern over its capacity to run two of the government’s mega-water projects, worth a total of Bt160 billion.

Channel 5’s General Chatchai explained that the 6pm programme’s airing of the news report was suddenly cut off by commercials. It returned only after the report ended, prompting criticism on the Internet and social networks. Viewers suspected K-water was backed by some influential persons and the report criticising it might have been cut following an outsider’s intervention.

Chatchai insisted the news editor decided to suspend it on-air, saying there was no intervention by any other individual. He said he learned about this suspension at 8pm that day.

“I confirm 100 per cent that there was no intervention or order. I talked with the editor for the programme and the editor admitted a mistake of hurriedly publishing the report when they should have checked it first. I instructed the editor to take this as a lesson to prevent future mistakes.

“The Channel 5 news should be accurate and credible,” he said,adding that Army chief General Prayuth Chan-ocha later instructed the station to make sure news presentations were credible.

“It was fortunate that we suspended it in time,” he said.

Meanwhile, the Office of the National Water and Flood Management Policy acting chief Supoj Tovichakchaikul yesterday defended K-water, saying it was qualified for the government’s mega-water projects. He said K-water was a state enterprise with the South Korean government holding a 100 per cent stake. The South Korean Embassy certified its qualification.

Supoj said firms eligible to join the bidding had to have 10 years’ experience in construction, worth at least Bt30 billion. K-water had handled construction worth 682.8 billion, was ranked at A1 by Moody’s Investors and at A level by Standard and Poor’s. It had Bt650 billion in capital and earned Bt176 billion, he said. Supoj said he was consulting a legal team about what to do next about the TV programme.

This move followed a previous comment by Hyung Cheol Yum from the Federation for Environmental Movements that K-water was under the scrutiny of the South Korean National Audit and Prosecution agency and did not have the experience to operate a mega-project of this complexity.

As a picture of former prime minister Thaksin Shinawatra visiting K-water went viral, leading to criticism K-water had influential help to get the job, Supoj said the bidders had to go through procedures and selection based on ideas and works, not politics.


Yingluck tipped to double up as minister of defence
The Nation / Phuket Gazette
PHUKET: Media speculation is rife that Prime Minister Yingluck Shinawatra will double as defence minister after the widely expected Cabinet reshuffle.

During his administration, Chuan needed to consolidate his power because his government did not enjoy strong ties with the military. Samak and Somchai also doubled as defence minister with the same goal of keeping undercurrents of resistance to the ruling party under control, while preventing any rivalry with the powerful military.

The plan to have Yingluck double as defence minister dates back to the end of last year, but the move has met with resistance from the military, which fears she may not understand its culture and needs.

However, over the past two years Yingluck has proven that she can work well with the military, especially with Army chief General Prayuth Chan-ocha.

The plan for Yingluck to double as defence minister could provide the “big boss”, former premier Thaksin Shinawatra, with a way out, as many military members of the Pheu Thai Party have been jockeying for power and queuing up to meet him, especially when he recently visited Singapore.

Reports had it that party strategists wanted Prayuth to leave his post to become defence minister so that he can serve as a link to help bring about reconciliation. The big boss and the prime minister ag