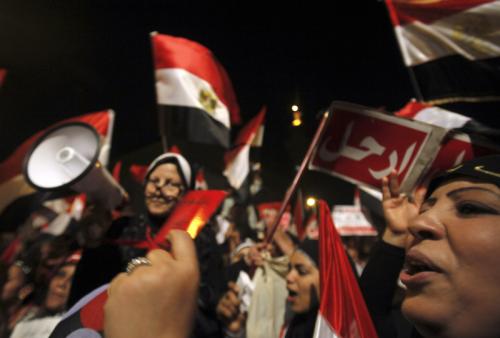 
Egypt braced for protests as Mursi stands ground
Reuters / Phuket Gazette
PHUKET: Egypt faces a showdown in the streets after President Mohamed Mursi failed, in an address to the nation, to satisfy the demands of opponents who want the Islamist to step down after a year in office.

Days of brawling between his supporters and their rivals have already left several dead and scores injured and the camps now plan mass rallies, raising the risk of bigger clashes that the army warns could prompt it to take command again.

On Friday, Mursi’s Muslim Brotherhood and their allies will gather in Cairo, as will some opposition groups. On Sunday, the opposition hopes millions will heed their call, a year to the day since Mursi became Egypt’s first freely elected leader.

“I am more determined than ever to go out on June 30 to demand the removal of an absolutely irresponsible president,” Khaled Dawoud, spokesman for a coalition of liberal parties, said on Thursday after Mursi’s marathon late-night address.

The army, which helped protesters topple Hosni Mubarak in 2011, says it will act if politicians cannot reach consensus. The United States, which continues to fund the military as it did under Mubarak, has urged Egypt’s leaders to pull together.

Mursi described his opponents as “enemies” and “saboteurs” loyal to the ousted dictator, whose “corruption” had thwarted him and driven the economy into crisis, though he conceded he had made some mistakes and promised reforms.

He also offered talks on “national reconciliation” and constitutional change to end the polarisation and paralysis that he said threatened democracy.

Opponents dismissed that as nothing new. Mursi and his allies complain that their opponents, defeated by the highly mobilised Islamist groups in a series of elections last year, are bad losers who have repeatedly snubbed offers to cooperate.

They in turn say Mursi makes such proposals in bad faith, accusing him of usurping the revolution by entrenching Brotherhood control of the state and “Islamising” society to the detriment of more secular Egyptians and religious minorities.

“I feel ashamed that this man has become a president of my state,” said Mahmoud Badr, the 28-year-old journalist behind a petition which he says has garnered 15 million signatures calling on Mursi to quit or face mass sit-ins from Sunday.

“Our demand was early presidential elections and since that was not addressed anywhere in the speech then our response will be on the streets on June 30,” said Badr, who told Reuters he had voted for Mursi in last year’s presidential run-off against Mubarak’s last prime minister. “I hope he’ll be watching.”

Islamists say the opposition tactics amount to a “coup” and many who were jailed under Mubarak fear a return of army rule.

Urging peaceful protests – and warning “violence will only lead to violence” – Mursi urged his opponents to focus on parliamentary elections, which may be held this year, rather than on “undemocratic” demands to overturn his election on the streets: “I say to the opposition, the road to change is clear,” he said. “Our hands are extended.”

Instability in the biggest Arab nation could send shocks well beyond its borders. Signatory to a key, U.S.-backed peace treaty with Israel, Egypt also controls the Suez Canal, a vital link in global transport networks between Europe and Asia.

“Egypt is historically a critical country to this region U.S. Secretary of State John Kerry, who is on a tour of the Middle East, said on Wednesday, highlighting economic problems.

With the government short of cash and seeking funding from allies and the IMF, Kerry said Egypt should curb unrest in order to attract investment and restore vital tourism income. The U.S. ambassador in Cairo has angered opposition activists by saying explicitly that their protests risked being counter-productive.

The secretary general of the Organisation of Islamic Cooperation, Cairo-born Turkish academic Ekmeleddin Ihsanoglu, raised the alarm about the fragility of the democracy Egyptians secured in the Arab Spring uprising two and half years ago:

“I hope Egyptian politics do not become polarised and that the polarisation does not turn into clashes,” he told Egypt’s state news agency MENA. “Because if that happened, then it means that there will not be a democratic solution.”

The Muslim Brotherhood’s insistence on its right to rule as it sees fit because of its electoral mandate has drawn comparison with the way Turkey’s Islamist-rooted government, dismissed street protesters earlier this month. In both cases, critics say large minority voices have been ignored.

Mursi threatened legal action against several named senior figures and raised the possibility of using military law codes in some cases. He said some judges and civil servants were obstructing him, and accused liberal media owners of bias.

Those attacks, as well as flashes of humour in the speech, showed a more animated Mursi than most Egyptians have seen since he emerged from obscurity as a last-minute stand-in to carry the Brotherhood’s banner in the presidential election. That may play well with his core supporters, if not with critics.

With protesters planning to gather around the presidential palace in a Cairo suburb, the head of the Republican Guard was quoted by the state news agency saying his men would not deploy outside the walls of the compound and so would not confront them – unless “there is an attempt to storm the gates”.

On Cairo’s Tahrir Square, the cradle of the revolution, people have pitched tents and are preparing to demonstrate. As Mursi spoke on a nearby television overnight, Ayman Anwar, a 55-year old computer engineer, was watching with disdain.

“I didn’t come out tonight to listen,” he said. “I came out because I’m angry. No one could have imagined that this would happen to Egypt. We’ve replaced one dictator with another.”

The floods, triggered by heavier than normal and early monsoon rains, have killed at least 822 people and displaced tens of thousands of inhabitants in Uttarakhand state, a popular destination for Hindu pilgrims due to its shrines and temples.

The disaster has been dubbed a “Himalayan tsunami” by the media due to the torrents of water unleashed in the hilly region, which sent mud and boulders crashing down, burying homes, sweeping away buildings, roads and bridges.

Eighteen bodies were cremated on Wednesday in the temple town of Kedarnath – one of the worst affected areas – and at least 40 would be cremated on Thursday, said a government doctor in Guptkashi, some 40 km (25 miles) from Kedarnath.