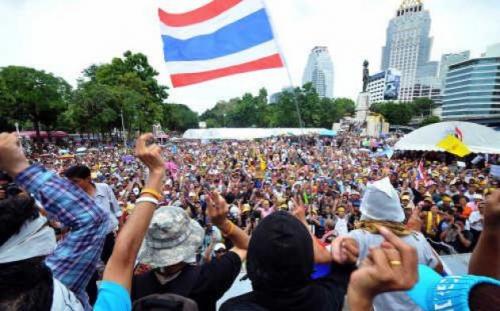 
No coup, Army insists, despite rising tension
The Nation / Phuket Gazette
PHUKET: The army yesterday dismissed the possibility of a military coup amid the escalating political tension. “This unfounded theory was just the personal imagination of some people who are out to confuse the public,” deputy Army spokesman Colonel Winthai Suwaree said.

Many reports circulating in social media have no basis in fact and falsely link the Army with politics. People should not be overly sensitive and should exercise good judgement in what information they take in, he said.

The Army and its chief Gen Prayuth Chan-ocha have been busy assisting flood victims across the country and organising celebrations for Her Majesty the Queen’s birthday.

The public should not to be alarmed about any cross-country movements of Army equipment that usually take place at this time of year.

The atmosphere at the anti-government rally in Lumpini Park by the ‘People’s Army to Overthrow the Thaksin Regime’ grew more excited. Organisers put up a large temporary stage in front of the King Rama VI Monument with a message “Time to destroy the country is up. Tyrants must leave”. Speakers took turns onstage to attack the government.

The movement’s leaders said the rally would remove the Yingluck government from power within seven days. Vendors set up street stalls to sell white masks and T-shirts emblazoned with anti-government messages.

Security was stepped up at Government House with barbed wire and security officials at every gate.

Signs saying “Government House is state property and off limits to outsiders” or “strictly restricted zone” were posted on entrances and exits.

Former prime minister Thaksin Shinawatra on Facebook ridiculed the rally, saying many core leaders were people without noteworthy achievements. The Democrats were reprimanded for siding with the protesters. The opposition bloc should relax and wait for its turn to form the government, he said.

Many leaders of anti-government campaigns were retired senior military or police brass with “broken hearts” from missing out on key positions during reshuffles when they were still in the service. Many retirees’ names had also been monopolised by the movement without their consent, he said.

Security at Prime Minister Yingluck Shinawatra’s residence on Yothinpattana Soi 3 has been beefed up with riot control police manning checkpoints set up around the vicinity. Metal barricades ringed the checkpoints and carparks. Yingluck stayed indoors the whole day.

Police dismissed reports that anti-government protesters would fan out to various destinations including Yingluck’s home.

Democrat party-list MP Ong-art Klampaiboon said if the government was sincere about not helping any particular person in debating an amnesty bill on Wednesday, it must not try to pass the bill in three straight readings and must broadcast the debate on state television channels.

“His actions have confused the public. It’s worrisome because Suthep thinks he cannot beat us at the parliamentary system so he must overthrow us unparliamentarily,’ he said.

Prompong also played down coup rumours, saying the people who started spreading coup rumours in social media harboured political motivations and they should take responsibility for their actions.

Pol Maj Gen Piya, spokesman of the police peace-keeping centre, said some high-ranking officials mentioned by the People’s Army as its supporters have denied their involvement with the group, including Pol Lt General Adithep Panchamanont, who has submitted a letter to the police refuting the report he supported the group seeking to overthrow the ‘Thaksin government’ and had filed a police complaint already.


Govt’s approval rating sinks to a new low
The Nation / Phuket Gazette
PHUKET: At the halfway point in its four-year term, the Yingluck government’s job approval rating has sunk to its lowest level, according to a Bangkok University Poll.

Prime Minister Yingluck Shinawatra was given a job approval rating of 4.9, slipping by 0.48 to the lowest level since she took office. Her diligence and devotion to solving problems was rated at 5.4 and her decisiveness was the least impressive at 4.5.

Corruption in various projects has done the most damage to the government’s image, at 19.9 per cent, followed by corruption and losses in the rice-pledging scheme at 19.3 per cent, and failure to stem the rising cost of living at 11.1 per cent.

The poll was conducted recently on 1,419 people across the country.

Abac Poll surveyed 2,114 respondents from July 28-August 3 and found that the issue of passing an amnesty bill presented the greatest political risk with a score of 9.19 on a scale of 10, followed by political interference at 8.6 and the Bt2-trillion loan bill at 8.2.

Puntharee Isarankura na Ayuthaya, assistant director, said the government is vulnerable due to many factors, especially conflicts over amnesty, which may spark violence. The respondents suggested that the government suspend or call off the deliberation on the amnesty bill.

“Politicians who favour high risks, especially businessmen-cum-politicians, must beware and not carry risks too long. Their duty in democracy is to reduce conflicts, not provoke them or become the cause of conflict.”

Dusit Poll’s interviews of 1,176 people from July 29-August 2 showed that 54 per cent were fed up with political rallies because they caused national divisions and hurt the country’s image.


Hunt continues for insurgents after attacks
The Nation / Phuket Gazette
PHUKET: Security forces in Narathiwat yesterday intensified their massive hunt for insurgents suspected of conducting a series of attacks in the region.

The hunt was carried out with helicopters and security forces on foot, who focused their search on a number of districts including Rangae, Chanae, Joh I Rong, Sri Sakhon and Tak Bai. Troop patrols targeted hilly areas where some insurgents were thought t