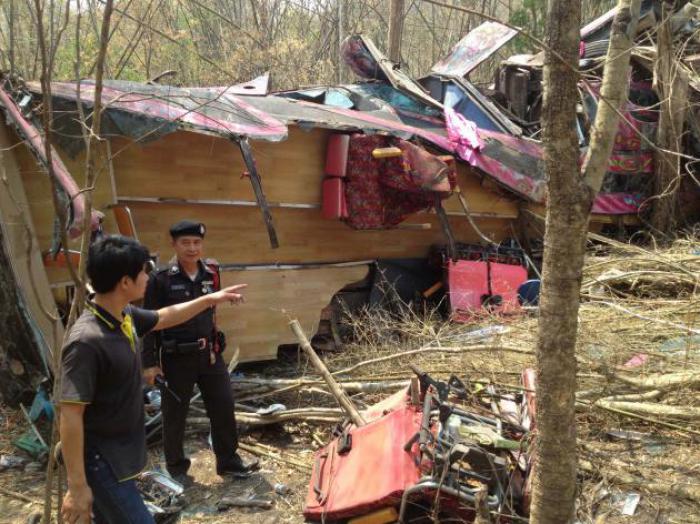 PHUKET: A double-decker bus plunged into a ravine in Tak province on Monday night, killing 29 passengers* and injuring 23 others. Most of them were elderly people.

As of press time, at least 20 of the injured are in hospital, with one of them in a coma. The names of the accident victims are available at www.tsm.go.th

The trip included both municipal officials and local villagers. Prapoj said they were travelling in four buses, and everything was smooth until the fourth bus plunged into the ravine.

“Initially, I was on that bus, but about half an hour before the accident, I got into the second bus to greet the participants,” Prapoj said.

While he considered himself lucky, the deputy mayor offered sympathy for those injured and killed in his group.

He said his municipality would compensate the families of those killed.

The accident took place at around 8.40pm on Monday on a portion of the Tak-Mae Sot Highway that ran along a downhill slope.

Caretaker Transport Minister Chadchart Sittipunt, who rushed to the scene of the accident, instructed engineers from the Department of Land Transport to investigate.

Meanwhile, Dr Narong Sahametapat, permanent secretary of the Public Health Ministry, said 19 of the victims being treated at King Taksinmaharaj Memorial Hospital were in a safe condition.

According to him, only one victim was critically injured and she had been transferred to Buddhachinnaraj Hospital in Phitsanulok provInce. “She has blood clots in her head that need to be removed,” Narong said.

* Initial reports cited that at least 32 people died in the accident.

PHUKET: Two M79 grenades exploded at the National Anti-Corruption Commission compound, and another on the Government Lottery Office next door, late on Monday night. They caused property damage but no casualties.

Of the two rounds targeting the NACC compound, one hit the deck above the ground floor and the other the roof of another building. The third grenade hit a building in the GLO compound and exploded.

An initial crime-scene investigation estimated the launch site was possibly 300 metres away, and located near Soi Nonthaburi 48 of Nonthaburi 1 Road, east of the NACC compound.

In another incident, two men on a motorcycle fired five shots at the Bangkok-based Davis Hotel owned by flamboyant politician Chuwit Kamolvisit on Tuesday morning. Chuwit said it was an actual shooting – not his own set-up. Surveillance camera footage showed two men riding past on a motorcycle and firing at the hotel, located in Sukhumvit Soi 24.

Meanwhile, police are obtaining an arrest warrant for a man identified as Sumeth Trakoolwunnoo, reportedly a senior guard working for the anti-government People’s Democratic Reform Committee. Sumeth allegedly was implicated by a suspect known as the “popcorn gunman”, who was recently arrested, police said.

They quoted Wiwat Yordprasit as alleging that Sumeth sheltered him and was involved in the shooting at Lak Si intersection in February.

Police spokesman Pol Maj Gen Piya Uthayo accused Sumeth of being one of 22 suspects under scrutiny by the police for involvement in the shooting. Sumeth is however not among the four PDRC guards wanted on arrest warrants already approved by the court.

Police yesterday arrested four pro-government red shirts, one a woman, for assaulting a monk – an incident widely distributed in images online. A large group of people is seen clearly attacking the monk, but police arrested only four people.

PHUKET: Political parties plan to hold talks and send representatives to People’s Democratic Reform Committee chief Suthep Thaugsuban for discussions to resolve the political deadlock, as they fear internal conflict could even lead to the country’s suspension from Asean.

The coalition parties will call a meeting of 53 political parties to find out what each party thinks about the Constitutional Court ruling that nullified the February 2 election.

Prompong said the Democrat Party would be invited to join the meeting. If the party rejects the invitation, the Democrats would be criticised as not being sincere with the public on the issue of democracy, the spokesman said.

Chart Thai Pattana Party’s key member Somsak Prissanananthakul said politicians known to be close to Suthep would try and convince him to enter into negotiations.

“In this political crisis, no one wins 100 per cent or loses 100 per cent. The Asean integration will begin in about 100 days. If we are still struggling with internal conflicts, we may lose the chance to become an Asean economic hub as we have aspired. In a worst-case scenario, we may be suspended from Asean,’ he said.

Suthep said yesterday that he has at no time approached anyone for the position of interim premiership, saying the time is not ripe for such a move.

He added that the PDRC would not join talks with the Election Commission in order to find a political solution to the ongoing problems.

Caretaker Deputy Commerce Minister Nuttawut Saikuar recently disclosed a list of people who he claimed were candidates for interim premier to replace Yingluck Shinawatra in case she were to be indicted by the national anti-graft agency over the rice-pledging scheme.

Suthep said the PDRC has never approached anyone to become an interim prime minister and the red shirts’ list of names comes from their own imagination.

“We haven’t moved to that process, as we have yet to remove the Thaksin regime. The prime minister must resign first and only after that will the search for a neutral premier start,” he said.

The former deputy prime minister said the PDRC will definitely not attend any negotiations except face-to-face talks with the prime minister broadcast live on television.

The PDRC has stressed its stand on national reforms before an election, he said, adding that a new general election will be useless given voters’ poor response to the Senate’s advance election on Sunday.

The Constitutional Court annulled the February 2 election, compelling the EC to organise a new round of balloting nationwide.