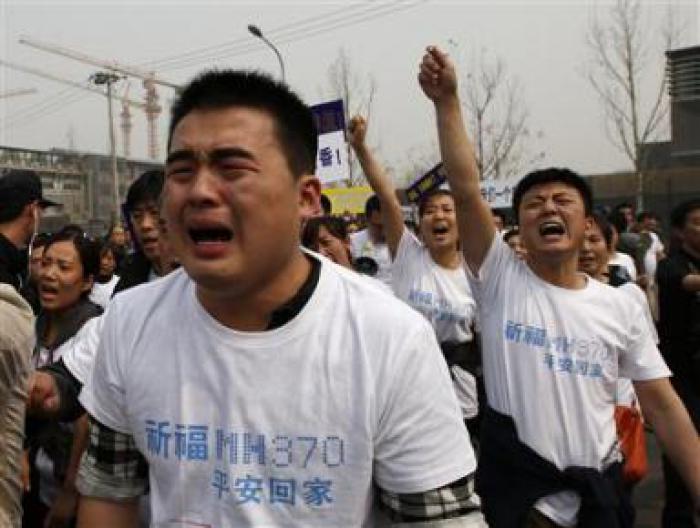 PHUKET: Dozens of angry relatives of passengers on a lost Malaysian jetliner clashed with police in Beijing on Tuesday, accusing the Southeast Asian country of “delays and deception” a day after it confirmed the plane crashed in remote seas off Australia.

About 20 to 30 protesters threw water bottles at the Malaysian embassy and tried to storm the building, demanding to meet the ambassador, witnesses said. Earlier, the relatives, many with tear-stained faces, had linked arms and chanted “Malaysian government has cheated us” and “Malaysia, return our relatives” as they marched peacefully and held banners.

The relatives’ grief and anger was unleashed on Monday night after Malaysian Prime Minister Najib Razak announced that Malaysia Airlines Flight MH370, which vanished more than two weeks ago while flying to Beijing from Kuala Lumpur, had crashed in the southern Indian Ocean.

Citing satellite-data analysis by British firm Inmarsat, he said there was now no doubt that the Boeing jet came down in the ocean in one of the most remote places on Earth – an implicit admission that all 239 people on board had died.

Bad weather in the region far off Australia’s western coast on Tuesday forced the suspension of the search for any wreckage, just as a series of satellite images and other sightings of floating objects had raised hopes that debris from the plane would be found.

Malaysia’s confused initial response to the Boeing 777’s disappearance and a perception of poor communications has enraged many relatives of the more than 150 Chinese passengers and strained ties between Beijing and Kuala Lumpur.

After Najib’s announcement, Chinese Deputy Foreign Minister Xie Hangsheng demanded Malaysia hand over all relevant satellite analysis showing how Malaysia had reached its conclusion about the fate of the jet.

A group reportedly representing families issued a statement describing the Malaysian airline, government and military as “executioners” who constantly tried to delay and deceive them.

“We will take every possible means to pursue the unforgivable crimes and responsibility of all three,” said the statement on the microblog of the Malaysia Airlines MH370 Family Committee.

The relatives protesting in Beijing held signs that said: “MH370, Don’t let us wait too long!” and “1.3 billion people are waiting to greet the plane”. They wore matching t-shirts that said: “Best of luck to MH370, return home safely.”

“We’ve waited for 18 days and still, you make us wait. How long are we supposed to hang on?” a woman surnamed Zhang told Reuters.

The protest ended after a few hours, when police told protesters to get on buses and escorted them away.

Criticism of the Malaysian national carrier mounted after some relatives of those on board first received the news that the search for survivors was over in an SMS from the airline, which said: “We have to assume beyond all reasonable doubt that MH370 has been lost and none of those on board survived.”

At a news conference at Kuala Lumpur’s international airport on Tuesday, company officials defended the move, saying the text message had only been sent as a “last resort” to ensure that some relatives did not hear the news first from media.

“This is a time of extraordinary emotions and we fully understand,” said Malaysia Airlines Chairman Mohd Nur Yusof. “In fact, we really feel for the next of kin. In terms of how they react, it’s emotional.”

Asked whether he would resign over the crisis, the airline’s chief executive, Ahmad Jauhari Yahya, said that would be a “personal decision” to be made at a later time.

Flight MH370 vanished from civilian radar screens less than an hour after taking off on March 8. No confirmed debris from the plane has been found since.

Investigators believe someone on the flight may have shut off the plane’s communications systems. Partial military radar tracking showed it turning west and re-crossing the Malay Peninsula, apparently under the control of a skilled pilot.

Recovery of wreckage could unlock clues about why the plane had diverted so far off course. Theories range from a hijacking to sabotage or a possible suicide by one of the pilots, but investigators have not ruled out technical problems.

An international air and sea search in the area on Monday spotted several floating objects that might be parts of the plane and an Australian navy ship was close to finding possible debris, Australian Prime Minister Tony Abbott said.

But the Australian Maritime Safety Authority (AMSA) said gale-force winds, heavy rain and low cloud meant planes could not fly safely to the zone on Tuesday, and waves of 6 metres (20ft) or more forced the navy ship from the area.

The search site is far from commercial flight paths about 2,500 km (1,550 miles) southwest of Perth, a region of deep, frigid seas known as the Roaring 40s where storm-force winds and huge waves are commonplace.

Malaysia Airlines said in a statement that it would make arrangements to fly relatives to Australia once it had approval from the investigating authorities.

Australia’s Immigration Minister Scott Morrison said his department was working with the airline and Beijing to facilitate visas. Relatives would be given tourist visas with the usual fees waived, he said.

Najib’s announcement opens the way for what will be one of the most costly and difficult air crash investigations ever. Normally, an official investigation can only begin once a crash site has been identified. That would give Malaysia power to coordinate and sift evidence.

A government source told Reuters that Malaysia would lead the investigation, but hoped other countries, especially Australia, would play a major role.

The United States said it was sending an undersea Navy drone to Australia, in addition to a high-tech black box detector, to help in the search.

The so-called black boxes – the cockpit voice recorder and flight data recorder – record what happens during flight. Black boxes carry locator beacons but they fade out after 30 days.

Najib said Inmarsat had performed further calculations on data gleaned from faint pings picked up by satellite that initially only narrowed the search area to two massive arcs.

That was not enough for some of the relatives. “There was no evidence,” a protester at the Malaysian Embassy surnamed Wang told Reuters. “It was just based on analysis from the satellite data and nothing found. Why would we believe it?”