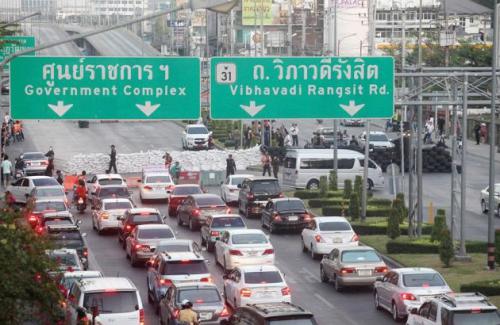 
Stage set for huge Bangkok shutdown
The Nation / Phuket Gazette
PHUKET: The People’s Democratic Reform Committee (PDRC) will today begin their Shutdown operation to try to seize seven sites in Bangkok at 9am after a series of blockades at state agencies – in a bid to paralyse Yingluck Shinawatra’s administration until she steps down.

The first anti-government group – from the Northeast and led by former Democrat MP Issara Somchai from Ubon Ratchathani – yesterday occupied Lat Phrao intersection to kick off the protest.

Meanwhile many groups were seen building a blockade and barriers in many locations across the capital including at the Government Complex in Chaeng Wattana and Pathumwan.

The Centre for the Administration of Peace and Order (CAPO) announced yesterday that the authorities would ban people from entering seven locations – Sala Daeng, Pathumwan, Ratchaprasong, Asoke, Victory Monument, Lat Phrao and the middle of Rajdamnoen. Vehicles would be prohibited from entering those locations, it said.

People could not entry eight buildings without prior permission. These were the Government Complex, CAT headquarters in Chaeng Wattana and Bang Rak, TOT headquarters, Thaicom satellite stations, Aero Thai company on Rama IV and the Police Club in Vibhavadi.

PDRC chief Suthep Thaugsuban will begin with a march from Rajdamnoen to Lan Luang, Rajthevi before a group of protesters would separate to Victory Monument and another would go to Pathumwan, according to PDRC spokesman Ekanat Promphan.

Members of the Dharma Army Foundation will take charge at the Rajdamnoen stage when the PDRC moves to other locations. They will turn the capital into a Tambon (sub-district)-like community. The seven rally sites would be like seven villages in the subdistrict, Ekanat said. He noted that every village would have a phu yai baan (village head) to take care of the area and provide services to protesters.

Protesters had functions to work as soldiers to surround or perhaps storm into buildings of state agencies to stop their operation during working hours from 9am-4pm everyday, Ekanat said. Protesters would return to their respective seven stages in the evening everyday to listen to leaders’ conclusions about the mission and prepare for further missions, he said. But the shutdown was mostly aimed at government agencies. Mass transport would be operated as usual, he said.

People from southern provinces have reportedly joined the shutdown operation.

Prime Minister Yingluck Shinawatra was seen at National Police Headquarters yesterday, where she had a meeting with many ministers and senior officials including Deputy Prime Minister Surapong Tovichak-chaikul, police chief Adul Saengsingkaew – to assess the situation.

Labour minister Chalerm Ubumrung, who was assigned to oversee the protest, said the government would not react to the rally with violence. It would mostly be in a defensive mode, he said. “We will allow them to do as they want to do. The only concern is the intervention of a third party to create violence,” he said.

Meanwhile, the Election Commission (EC) warned yesterday it may not be able to endorse any partylist MP if anything ruins ballot counts at any polling unit. “In that scenario, the February 2 election will not provide any of the 125 partylist MPs,” EC Commissioner Somchai Srisutthiyakorn said.

Speaking to Nation Channel after sending a letter to the government seeking to postpone the poll till May 4, Somchai said preparations for the February 2 election were mired with problems. “We still lack about 100,000 staff members to man polling units,” he said. He also pointed to the fact that 28 constituencies in the South still did not have any MP candidates.

Meanwhile, pro-government red shirts poured onto the streets in many provinces yesterday to promote their causes. The reds tried to drum up support for the February 2 ballot by marching through provinces such as Samut Prakan and Pathum Thani. Red shirts also gathered in Ayutthaya and Nonthaburi and vowed to prevent the Shutdown.

In Udon Thani, redshirt leader Kwanchai Sarakham pledged to protect Prime Minister Yingluck if violence breaks out in the capital. “Supporters of the government from 20 northeastern provinces will gather here in Udon Thani where Yingluck is definitely welcome,” he said.


Rival groups on the move upcountry
The Nation / Phuket Gazette
PHUKET: On the eve of the Bangkok Shutdown, supporters of the anti-government People’s Democratic Reform Committee and pro-government red shirts poured onto the streets yesterday to promote their causes in many provinces.

The PDRC is pushing for reform of the country before the next general election. If it gets its way, the poll will not take place on February 2 as scheduled.

The red shirts are trying to drum up support for the February 2 ballot by marching through provinces such as Samut Prakan and Pathum Thani.

But in Nakhon Ratchasima, about 80 PDRC backers briefly blocked a road in front of the luxury vacation home of Tarit Pengdith, director-general of the Department of Special Investigation. They accused Tarit of catering to political favourites and a corrupt government, but he was not there.

After demonstrating for about 20 minutes, they joined a stream of PDRC supporters from several provinces heading to Bangkok to help out with the Bangkok Shutdown activities.

From Surat Thani, Si Sa Ket and Roi Et, PDRC supporters were seen jumping on Bangkok-bound buses. About 500 Phitsanulok people boarded the train to the capital. They are preparing to help the PDRC pile up pressure on the caretaker government by staging the Bangkok Shutdown.

However, red shirts in Ayutthaya and Nonthaburi gathered and vowed to prevent the Shutdown.

“Supporters of the government from 20 northeastern provinces will gather here in Udon Thani where Yingluck is definitely welcome,” he said. In the evening, he joined a candlelit vigil to promote peace, saying about 500 red shirts on motorcycles will hit Udon Thani roads today to campaign against a coup.


Pheu Thai: Why delay vote till May 4?
The Nation / Phuket Gazette
PHUKET: Pheu Thai Party leader and caretaker Interior Minister Charupong Ruangsuwan said the government was ready to consider the Election Commission (EC)’s proposal that the election be postponed, but said the agency should state why it believed the election would go smoothly if it was held on May 4.

Charupong said that legally, the election could not be postponed beyond February 6, as the election law stated it must be held within 60 days of a House dissolution. The only exceptions are in cases of disasters or riots, and only in the affected areas, not nationwide.

“If we postpone because of fears that there would be violence, it would set a bad precedent for future elections,’ he said.

Pheu Thai spokesman Prompong Nopparit yesterday submitted a letter to the EC to show the party’s stance that the poll must be held on Feb 2, since a budget of over Bt3.8 billion has been allocated fo