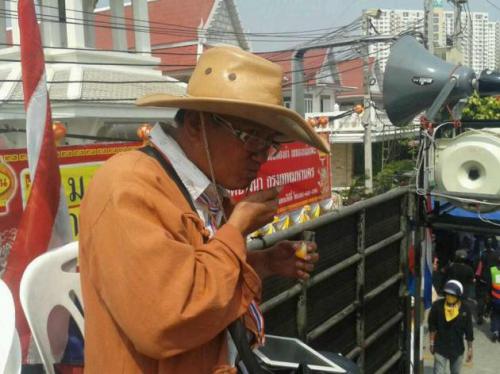 
Anti-Thaksin protest leader slain in public shooting
The Nation / Phuket Gazette
PHUKET: Suthin Taratin, one of leaders of People’s Army to Overthrow the Thaksin Regime, was killed by a gunshot to the head as he was leading a blockade at an advance polling station in Bangkok’s Bang Na district earlier today.

He was declared dead at a hospital after being shot at the head when the protesters were confronted by red shirt supporters at an advance polling station in Wat Sri-iam Temple’s compound.

Nine others people were injured and rushed to hospitals nearby.

Police have yet to identify the shooter.

Suthin was an non-governmental organisaton officer working for Local Development Institute (LDI) and he was close to former secretary-general of the State Enterprises Labour Relations Confederation Somsak Kosaisuk.

He was one of founders of People’s Army to Overthrow the Thaksin Regime, which was established in June, 2013, and was chief of guard of the group when they staged rally at Bangkok’s Lumpini Park until the group joined the People’s Democratic Reform Committee.