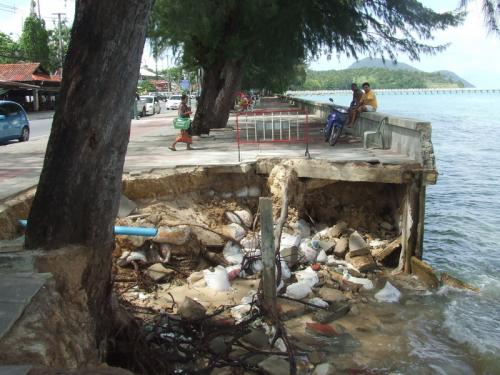 Presenting the 2011-2012 survey data in a meeting at Krabi City Hall, Vudhichai identified 57 coastal-erosion hotspots along the 1,093-kilometre Andaman coast – 45 locations on the mainland and 12 on islands in Krabi, Trang, Phang Nga, Phuket, Ranong and Satun.

He proposed the building of coastal-protection barriers to lessen the severity of the erosion. An advisory committee was looking into ways of constructing durable barriers out of material that could be found locally, had low maintenance costs and would be accepted by residents.

PHUKET: The Department of National Parks, Wildlife and Plant Conservation has resumed its nationwide campaign to randomly test birds for the deadly avian influenza virus (H5N1), to ensure Thailand is free from further outbreaks.

Over 300 barn swallows were collected from Silom by a veterinarian team from the department. In checking the birds’ health to detect H5N1 virus, they also collected bird saliva and dropping samples, to be sent for lab tests at the National Institute of Animal Health and Kasetsart University.

The lab results should be known next week, deputy director of the department Teerapat Prayoonsit said, while leading the team of 100 veterinarians to catch birds in Silom. To date, his department has found no spread of the virus among birds in Silom since the department started a campaign to detect H5N1 back in 1991.

The number of barn swallows in Silom was around 500,000 two years ago, but has dropped to 3,000-5,000 birds as local agencies have cut trees and removed electricity posts. Teerapat said 40 mobile teams of 800 veterinarians were monitoring for a possible bird-flu outbreak nationwide.

“We are collecting samples from birds in Samut Prakan, Trang, and Krabi and we will do the same in other areas later,” he said. Thailand has reported 25 confirmed cases of human infection and 17 deaths since 2004. But over the past six years there have been no reports of human infection or deaths.

PHUKET: Less than a week after the notorious former godfather Somchai Khunpluem was arrested and sent to jail, his family has begun to seek a Royal pardon for him.

The plan comes after the 76-year-old convict was moved from a prison to a hospital in his hometown and political stronghold, Chon Buri. The Chon Buri Prison approved the transfer citing Somchai’s need for medical treatment.

“We are going to ask for a Royal pardon. We will be proceeding in line with laws and an appropriate time frame,” Culture Minister Sonthaya Kunplome, one of Somchai’s sons, said yesterday.

“I am doing my duty as a son.” Observers say that thanks to Somchai’s business and political influence, his children have had a smooth, successful ride in politics. Somchai, widely known as Kamnan Poh, went on the run only after he was convicted of corruption and then of a murder.

He had been in hiding for about seven years before being arrested late last month in Bangkok. Sonthaya yesterday shrugged off a suggestion the Khunpluem family would run into trouble for illegally sheltering Somchai during the past many years.

“My father has moved around on his own. He goes wherever he wants,” Sonthaya said. He also believed his father’s case would not affect his political status.

Deputy Prime Minister Chalerm Yoobamrung also dismissed a suggestion Somchai had enjoyed preferential treatment. “When an inmate is ill, he can get treatment,” he said.

On the move to ask for a Royal pardon, Chalerm said any inmate had the right to request one.

Suspicion is growing among officials that someone there might have intentionally provided treatment for Somchai without alerting the authorities, despite the fact he was wanted on murder and corruption charges.

PHUKET: A veteran journalist from the mass-circulation Thai Rath has resigned as president of Suan Dusit Rajabhat University Council. He said he was dissatisfied that the university allegedly conducted opinion surveys to please the government.

Manit Suksomchit, a senior editor of Thai Rath and former member of the constitution drafting assembly (CDA), said that he decided to resign as the council president because he had a different stand from the university.

Manit has been the president of the university council since 1987.

He said he had a difference with the university after Suan Dusit Rajabhat was hired by the government to organize 108 hearings on charter amendments. Aside from the fact that a university should not get involved in politics, he said he disagreed with the efforts to amend the 2007 charter.

“I took part in drafting the 2007 Constitution and I think it is a good charter because it plugged loopholes in the 1997 charter to prevent businessmen from reaping benefits through corruption. Several points that would have allowed politicians to abuse [authority] had been prohibited,” Manit said.

“The 108 hearings on charter amendment would mobilize people to tear down the Constitution. The interior minister had also said he would recruit people to attend the hearing, adding that, ‘The fool should not join in the hearing’.

“So I can’t agree with any effort to annul this charter,” he said.

Manit rejected media reports that he was angry with Dusit Poll as it was “hired” to conduct polls, saying he had never said so.

He said the last straw for him was an opinion survey by the university, announced on December 20. In the survey, respondents were asked which politicians they would like to survive if the world ended. Manit said the survey brought widespread criticism that the poll was conducted to please the prime minister.

Manit said the university rector asked him to reconsider his resignation. “But I replied that had I wanted to stay, I would not have resigned. I announced my resignation at the council meeting and all applauded me, but I don’t know if they like me or not. So far, no one has followed suit.”

He said the university continued to conduct strange surveys, but he did not read the survey questions in detail.

Assoc Prof Dr Sukhum Chaloeysup, who is in charge of Suan