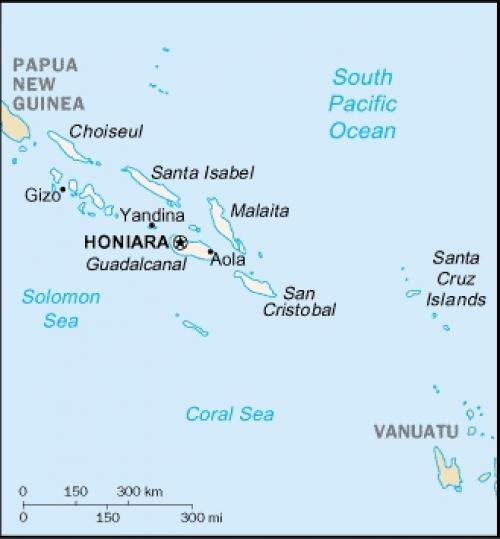 The shallow quake was only 5.8 km deep and the epicentre was 81 kilometers west of Lata in the Solomon Islands.

A tsunami warning is in effect for the Solomon Islands, Vanuatu, Nauru, Papua New Guinea, Tuvalu, New Caledonia, Kosrae, Fiji, Kiribati and Wallis and Futuna. A tsunami watch is in effect for numerous other areas. There were no immediate reports of damage or fatalities.

PHUKET: Members of the opposition Syrian National Coalition have called for an emergency meeting to discuss a controversial proposal by its head to negotiate with President Bashar al-Assad’s government, opposition sources said.

Sheikh Moaz Alkhatib, the moderate Islamic cleric who leads the 70-member assembly, said he would be ready to meet Assad’s ceremonial deputy, Farouq al-Shara, if Assad fulfils conditions including the release of tens of thousands of political prisoners.

“The Coalition needs to convene to chart an urgent strategy after the reverberations of the initiative and seize on the momentum it has created, regardless of the reservations of some members,” one Coalition official said.

While some opposition figures have criticised Alkhatib’s offer to talk to Assad’s representatives, others say it could expose Assad’s proposals for dialogue as hollow.

“The initiative is proving to the international community that Assad is not willing to compromise one millimetre and we need to take advantage of that,” the official said.

Thirty members of the Coalition have sent a letter to its leadership demanding an emergency meeting for the whole assembly, according to Coalition sources.

Ahead of surprise meetings last weekend between Alkhatib and the foreign ministers of Russia and Iran, Assad’s main backers, the Coalition abandoned its policy of refusing to talk with the Assad regime unless Assad stepped down first.

The Syrian National Council, a powerful block dominated by the Muslim Brotherhood inside the Coalition, said Alkhatib made an “individual decision” by launching the initiative, which contradicts the Coalition’s charter calling for “the downfall of the regime with all its symbols and components.”

The statement said Alkhatib’s meeting with the Iranian foreign minister was a “stab to the revolution.”

But an official in the Council said it was reluctant to call for the removal of Alkhatib because his initiative had support in the street.

“Alkhatib seems to be in tune with popular mood but the Council feels that the initiative is all over the place and it needs to be defined in writing,” the official said.

“The Council will sit tight and wait for the initiative to hit a wall when it becomes clear that Assad is not implementing anything and the prisoners are still languishing in his jails.”

PHUKET: PARIS (Reuters) – France plans to begin pulling troops out of Mali from March and will focus its operations on flushing out Islamist rebels in the north of the country, Foreign Minister Laurent Fabius said on Tuesday.

“We will continue to act in the north where some terrorist havens remain,” he said in an interview for Wednesday’s Metro newspaper.

“I think that from March, if everything goes according to plan, the number of French troops should fall.”

France has deployed nearly 4,000 ground troops, as well as warplanes and armoured vehicles in its three-week-old Operation Serval that has broken the Islamist militants’ 10-month grip on northern towns.

It is now due to gradually hand over to a U.N.-backed African force of some 8,000 troops, known as AFISMA, of which around 3,800 have already been deployed.

Paris and its allies want to prevent the Islamists from using Mali’s desert north as a base to launch attacks on neighbouring African countries and the West.

“The narco-terrorist groups have been stooped thanks to our strikes,” Fabius said. But there can still be individual acts. We have to stay on our guard.”

PHUKET: The Vatican’s new sexual crimes prosecutor on Tuesday acknowledged that the U.S. media “did a service” to the Catholic Church through its aggressive reporting on child abuse that helped the Church “confront the truth”.

The rare acknowledgement came from Father Robert Oliver, a canon lawyer from the U.S. diocese of Boston, speaking at his first public appearance since becoming the Vatican’s “Promoter of Justice” last week.

“I think that certainly those who continued to put before us that we need to confront this problem did a service,” he said in response to a question on whether the role of an aggressive American media was, in hindsight, a blessing for the Church.

“They (the media) helped to keep the energy, if you will, to keep the movement going so that we would, honestly and with transparency, and with our strength, confront what is true,” he told a news conference.

Since the abuse scandal erupted in Boston in 2002 and spread around the world, some Church and Vatican officials have accused the media of irresponsible journalism and exaggeration.

Oliver, whose Vatican department investigates cases of abuse, is the successor to Monsignor Charles Scicluna, who held the post for 10 years before being named a bishop in Malta.

Last year’s landmark symposium brought together some 200 people including bishops, leaders of religious orders, victims of abuse and psychologists.

Obama’s trip, his first to Israel since taking office, signalled that he intends to make the volatile Middle East – where Iran remains locked in a nuclear standoff with the West and Syria is caught up in a bloody civil war – a top priority in his second term.

While the White House gave no exact dates for the trip, Israel’s Channel 10 television station cited unnamed sources in Washington saying Obama would visit the Jewish state on March 20.

The choice of Israel for Obama’s first foreign travel since his January 21 inauguration will give the president and Israeli Prime Minister Benjamin Netanyahu a chance to repair their notoriously fractious relationship and seek common ground on confronting the region’s troubles.

Netanyahu is now occupied with the task of forging