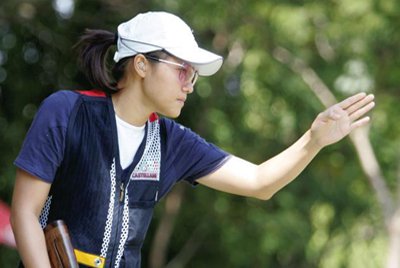 PHUKET: Sutiya Jiewchaloemmit is upbeat about her chances in the Olympics following intensive training in Germany with her coach Jan Henrik Heinrich.

The national skeet shooter, who has been in London for almost a week, said a month of working in Krelingen, Germany has boosted her confidence so that she can better the fifth place she earned in her Olympic debut in Beijing four years ago.

“My level of my confidence is very high as a result of continuous training and hard work. But I cannot predict the results of my rivals. But I think I will be okay no matter what the results are,’ said the world No 8, who finished fourth in a pre-Olympic competition held in London three months ago.

The 26-year-old sharpshooter says she had no problem adjusting to the London weather as she is relatively accustomed to European conditions. However she was more concerned with adjusting to the atmosphere at the Royal Artillery Barracks, the shooting venue.

“It’s a tough shooting range, although I did compete here during the pre-Olympic event. It takes time to adjust for shooting techniques that require high concentration. My German coach has helped me in changing some techniques and I have improved,’ said Sutiya, the only Thai skeet and trap shooter in the Games.

In the first season, AP Honda staged the competition separately, with only the winners from each half of the national finals clinching berths to train at Liverpool and Manchester United. In fact, the first group of winners returned from training in England only last week.

This year the company has joined hands with the Sports Authority of Thailand, the Football Association of Thailand and the Office of the Basic Education Commission, and decided to increase the participants’ chances by handing the winners from the country’s five regions an opportunity to hone their skills in England.

“From our three-year plan in building our brand under the “Discover Your Fun” campaign starting last year, we’ve handed Thai people a variety of fun events, including soccer, as part of our partnerships with Liverpool FC and Manchester United.

“Honda Red Champions is a five-a-side competition we host to give young Thais a once-in-a-lifetime experience with two world class clubs in England.

“The event was a big success in the first year. There were more than 3,000 teams across the country who took part. After intense competition, we eventually got two teams as the country’s representatives to train at Liverpool and Manchester United.

“They gained valuable experience from training with the two clubs, which have produced a host of world class players. The other players taking part in our event also attracted interest from many Thai football clubs.

“We decided to give more opportunities in the second year of the event to make sure everyone has the chance to pursue their dreams. We’re also preparing to invite the school director of each winning team to accompany them to England to see how the training goes. We hope they will come back with an idea to create similar training in their schools,” said Chiaki Kato, the AP Honda president.

Being at the stadium for a Chelsea-Manchester United match is just a dream for most Thai football fans. That dream just took a step closer to reality thanks to a deal between the Champions League champions and the Red Devils.

Singha, which is a global partner of both clubs, plans to make the “dream” match come true as part of the celebration’s for the beer maker’s 80th anniversary.

“We want to organize such a match in Thailand as a first for the country. The teams are now willing to play their part,” said Jaturon.

The two clubs initially ruled out Singha’s proposal when it was put on the table four months ago. But after the company convinced them to join its birthday celebrations, they agreed to joint talks aimed at making the dream match a reality.

However, the deal has not been completed and faces a hurdle: English Premier League clubs have a policy of not playing against each other outside England, except in the Champions League.

“It is all about dignity and sponsors,” explained Jaturon. “The hardest part is how to manage the conflicting interests of sponsors. The clubs have rival sponsors. Nike and Chevrolet support the Red Devils, while Adidas and Audi sponsor the Blues.”

Jaturon says the possibility of such a match going ahead is now 60-70 per cent, but is hopeful a deal can be finalized within three to four months. “If they settle their differences, the match will be held in August next year to mark the 80th anniversary of Boonrawd. The budget for the project would be several hundred million baht.”

If they fail to reach a deal, the two teams will still visit Thailand, but to play against local teams, Jaturon added.

The Thai beverage-maker is in the process of renewing sponsorship deals with both clubs. In 2010, Singha signed a three-year contract with United and a four-year deal with Chelsea. The new deal will extend each of those sponsorships for a further three years.

“They are very happy with us. We have agreed on all the benefit rights, but we are still negotiating over the final figure.”

The sponsorship fees had increased by between 20 and 30 per cent over the previous 100 million baht per-year deal, said Jaturon. The new deal is scheduled to be signed by August, before the new season kicks off.

Fans can expect to see Singha’s logo adorning the backdrop for media interviews at Chelsea.

Jaturon also said the partnerships had been very successful for Singha’s brand awareness and sales volume. The company received several offers from teams in the EPL, Italy and German league who were interested in partnering with Singha.

Sales of Singha beer in the UK doubled after the partnership, according to Jaturon, who reckons beverage sales for Boon Rawd could reach 100 billion baht this year.

“We are partnered with two top clubs so we don’t need to spend more with other teams.” He refused, though, to rule out the possibility of Singha spreading its sponsorship to more big European clubs in the future.