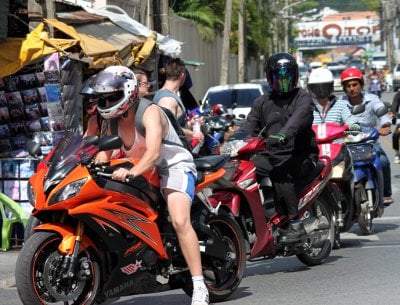 PHUKET: A long-awaited plan to reverse the direction of one-way traffic flow in Patong was expected to take effect in June, but has been delayed as work to complete a new roundabout at the north end of the beach road has fallen behind schedule.

The 4.2-million-baht Laem Petch Circle project was delayed due to the need to remove utility poles in the area and is now expected to be finished by August 12, said Phunsak Naksena, Chief Administrative Officer (Palad) at Patong Municipality.

However, it will still be several months after the circle has been completed before the flow of traffic will be reversed.

Under the current regimen that went into effect in mid-January 2007, southbound traffic is routed along Rat-U-Thit 200 Pi Road, while northbound traffic travels along the Thaweewong Road, better known to many as “the beach road”.

Completing the loop, Prachanukhro Road at the south end of the beach was made one-way toward the beach, while Phra Barami Road remained two-way.

“After Laem Petch Circle is finished, we will put up traffic signs and have arrows painted on the road, which will take an additional two or three months. Once that is finished, we will do a test run of reversing the traffic flow for about a month, probably in November,” explained Maj Saravut Chuprasit, chief of Kathu Police’s Traffic Division.

As part of the plan, Ruamjai Road, which connects Thaweewong Road and Rat-U-Thit 200 Pi Road near the southern part of the town, will become a two-way road on August 10, explained Maj Saravut.

Palad Phunsak expressed some worries about this aspect of reversing the traffic flow in Patong after talks with the Kathu Police, especially considering how narrow Ruamjai Road is.

“The road is quite small and some cars are always parked along the road. Cars will probably need to be parked on only one side of the road on days with even-numbered dates, and on the other side on odd-numbered dates,” said Palad Phunsak.