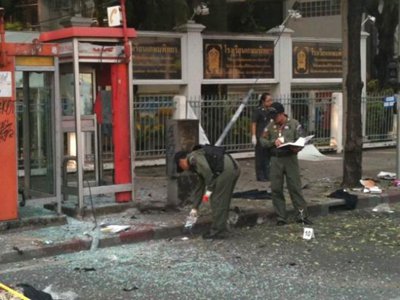 PHUKET (News Wires): Pol Lt Col Witthaya Poonsin, deputy commander of Klong Tan traffic police, said a foreigner, who has yet to be identified, threw the first bomb at a taxi on Soi Pridi Panomyong. The taxi was damaged in the explosion.

Witthaya said the man later walked to the main Sukhumvit 71 Road and when he spotted a police officer tried to lob another bomb at the officer.

The bomb slipped out of his hand and exploded. The blast cut both of his legs off and he was rushed to Chulalongkorn Hospital.

Sitthiparp said the man was likely an Arab who rented a house on Soi Pridi Phanomyong 36.

Sitthiparp said there was also an explosion at the house at 2 pm.

He said three foreigners were living at the house but two had fled.

He said police are still hunting for the two other foreigners.

Sanchai Boonsoonnern, the driver of the damaged taxi, told the Rawangpai TV program that the foreigner suddenly threw a bomb at his vehicle.

The bomb fell on the bonnet of his car and rolled under it and exploded.

The taxi driver was standing outside the vehicle so he shouted for help and tried to run after the attacker who ran towards the Sukhumvit 71 Raod.

Sanchai said the man tried to stop taxis to flee but none picked him up. Sanchai said he saw the man pull something from his bag and it fell on the ground and exploded.