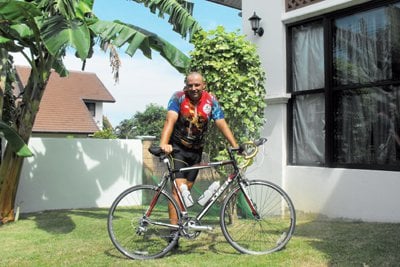 PHUKET: The kitbags are being put together and include Vaseline, talcum powder, bandages and ibuprofen for swollen muscles.

Yes, it’s time again for those hardy cyclists of the Bangers On Bikes Charity Bike Ride to furiously pedal from the capital of Thailand to the island province of Phuket.

The charity event was conceived three years ago by members of the Old Bangkok Bangers Rugby Club who were for sometime involved in a rural rugby development program for Thai children. A group of Banger players would go up country and teach the local children the rudiments of the game of rugby union. It was on such a trip, that a few of the players had the privilege of meeting the children from Asia Center Foundation (ACF).

After the weekend training session was finished, the players decided to help raise funds for the worthy efforts of the ACF.

The ACF’s long term mission is to build a school they can call their own. So the players decided to do something out of the ordinary and organize a sponsored cycle ride from Bangkok to Phuket. In the initial plan the ride would take six days, however, it was over in five days. The first year the Bangers raised 350,000 baht and last year they boosted that sum up to 410,000 baht. This year, the boys hope to raise more than 500,000 baht and have involved another cause, that of the Nak Suu Tigers program in Bangkok whose motto is “changing lives forever”.

One of the cyclists in the eleven-man pelaton is not of the Bangers, but from their rival Phuket rugby club, the Viagrabonds. Richard Folds, is also skipper of the highly successful Patong cricket club and a popular umpire in the Island Furniture cricket league.

Richard participated in the journey last year and has been putting in hours of training a week to get into shape for the 2012 run.

“Last year when we did the cycle we had seven guys, but this year there will be eleven plus five support crew. Now with the amount of people involved we have to be a bit more organized and have actually booked hotels along the route,” said Richard.

Speaking with Richard, it seems that he is relishing the challenge.

“Strangely, it got easier as the journey went on, even though we had some tough climbs and of course the traffic is always a worry. The hardest part for me was coming out of Bangkok along the salt flats and hitting a headwind. If you didn’t stay with the group you were spat out the back and had to work hard to get back into the ride,” he recalls.

The ride begins on February 20 and reaches Phuket on February 25. for more information visit arkintl.org or asiacenterfoundation.org.

Phuket Lifestyle: An elephant that is hard to forget

Phuket Lifestyle: Funk it up at the 2012 Mango House Festival