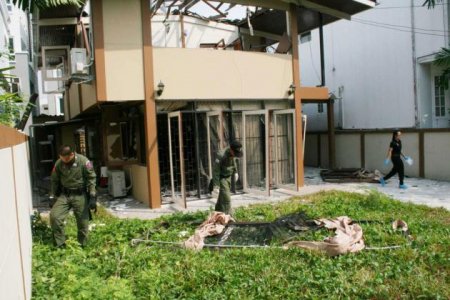 PHUKET (The Nation): Iran and Israel dropped diplomatic bombshells on each other yesterday, accusing one another of being behind Tuesday’s bomb blasts in Bangkok.

Israel was quick to implicate Iran in the bomb incidents. “The attempted attack in Bangkok proves once again that Iran and its proxies are continuing to act in the ways of terror and the latest attacks are an example of that,” Israeli Defence Minister Ehud Barak said.

But Iranian Foreign Ministry spokesman Ramin Mehmanparast denied his country was involved in any of the cases and said Tehran condemned any “terrorist action”. He told the official IRNA news agency: “The aim of the Zionist regime’s claims is to overshadow the assassination of Iranian scientists.”

The Iranian spokesman also accused Israel of “trying to harm the friendly and historic relations between Iran and Thailand”.

Also yesterday, the United States – a close ally of Israel – condemned the blasts in Thailand’s capital and suggested they may be linked to Iran.

State Department spokeswoman Victoria Nuland said the US was awaiting the results of investigations. She offered condolences to those injured.

Nuland did not blame Iran directly. But she noted Monday’s incidents in India and Georgia, and recent “Iranian-sponsored” and “Hezbollah-linked” plots to attack Israeli and Western interests in Azerbaijan and Thailand. She called it “reprehensible” for states to use terrorism as a foreign policy tool.

Thai authorities are holding two Iranians in connection with the three explosions in Bangkok on Tuesday.

One of the men, named as 28-year-old Saeid Morati according to a passport found in his possession, lost both his legs when he tried to hurl an explosive device at police while fleeing an earlier blast at a house in the Sukhumvit area. The other Iranian was detained as he tried to board a flight out of Thailand. A third suspect who fled to Malaysia was arrested at Thailand’s request.

Meanwhile, Foreign Minister Surapong Towichukchaikul yesterday said Thai authorities have not described Tuesday’s incident as an act of terrorism. But he urged terrorist groups not to include Thailand in their plots.

“At the moment, there is no evidence linking this incident to terrorism. So far the arrested [men] are accused of illegal use of explosives and of attempting to kill others and officials on duty,” Surapong said. “Personally, I believe the incidents in Georgia, India, and Thailand have no connection.”

He added, however, that: “I would like to ask people who think of plots harmful to Thailand to stop them. And I ask terrorists not to use Thailand as their base.”

The foreign minister called his press conference yesterday after 10 foreign countries issued travel advisories for their citizens following the blasts. They are the United States, the United Kingdom, New Zealand, Canada, the Netherlands, Australia, Brazil, Japan, Norway, and Ireland.

Surapong said the US ambassador to Thailand, Kristie Kenney, had called him on Tuesday evening to ask for details about the blasts. The US Embassy later issued a warning advising American citizens to be careful when traveling in Thailand.

“I thank Ambassador Kenney for calling first. That allowed me an opportunity to explain the situation and the actions by the Thai authorities aimed at restoring foreigners’ confidence,” he said.

The foreign minister had earlier expressed his disappointment over a warning last month by the US Embassy about possible terrorist attacks in Bangkok.

PHUKET (The Nation) : The three Iranian suspects in the Bangkok blasts are an assassination squad targeting Israeli diplomats, including the ambassador, a senior Thai intelligence official said yesterday.

One of their many methods was to attach magnetic bombs to diplomats’ cars, the source told Agence France-Presse on condition of anonymity.

The source and AFP did not give details on who or which countries were behind the suspects’ plan to strike against Israeli interests in Thailand.

The report corresponds well with foreign analyses pointing to an act of state-supported attack, or evidence being gathered indicating terrorism, but Thai authorities were attempting to play the incidences down both on Tuesday when they occurred and again yesterday.

An arrest warrant has been issued for an Iranian woman, Rohanni Laila, who entered Thailand on the same day as the three male suspects now in Thai and Malaysian police custody.

The Bangkok South Criminal Court has approved arrest warrants for all three male suspects following prescribed criminal procedures. They can now be placed under Interpol, if necessary.

Wichean Potephosree, secretary-general of the National Security Council, at a high-profile news conference yesterday said the attacks were not sabotage and not related to last month’s arrest by Thai authorities of Lebanese man Artris Hussein, who has Swedish nationality, as a terror suspect.

The local blasts had no connection with similar attacks in India and Georgia, he said, although Israel has said they were ordered by Iran and had common links to the incident near Sukhumvit Soi 71 in Bangkok.

“The US statement did not link the incidents in India and Georgia to the ones in Thailand. It only said whenever the incidents in other countries occurred, it indicates that the attacks could still be conducted in similar fashion elsewhere,” he added.

The second suspect, Mohammad Hazai, 42, was caught at Suvarnabhumi Airport late on Tuesday when he was about to board a flight to Malaysia.

The third suspect, Masoud Sedaghatzadeh, 27, managed to escape on an AirAsia flight, also on Tuesday evening, to Malaysia. However, Malaysian authorities yesterday detained the Iranian man at about 3pm in Kuala Lumpur at the request of Thai authorities. The suspect was about to leave the Malaysian capital for Tehran. He initially booked a February 25 flight for the Iranian capital.

Asked why Thai authorities were playing down the attacks and their likely links to transnational terror operations while foreign governments and media channels were indicating otherwise, Wichean did not answer, appearing grim and tense.

National Police chief Priewpan Damapong said separately that the use of explosives in Tuesday’s attack was “similar to a bomb incident in India”.

The three Iranian men were plotting to kill certain individuals but not to destroy any structures in Thailand, he said, giving no sources of information or analytical reference.

Saeib Morabi, who lost his legs in the incident, is being treated at Police General Hospital.

Police investigators visited him yesterday and, when evidence is available, will likely charge him with attempted murder, attempted murder of policemen on duty, possessing explosives and firearms without permission, and causing damage through explosions, a police source said.