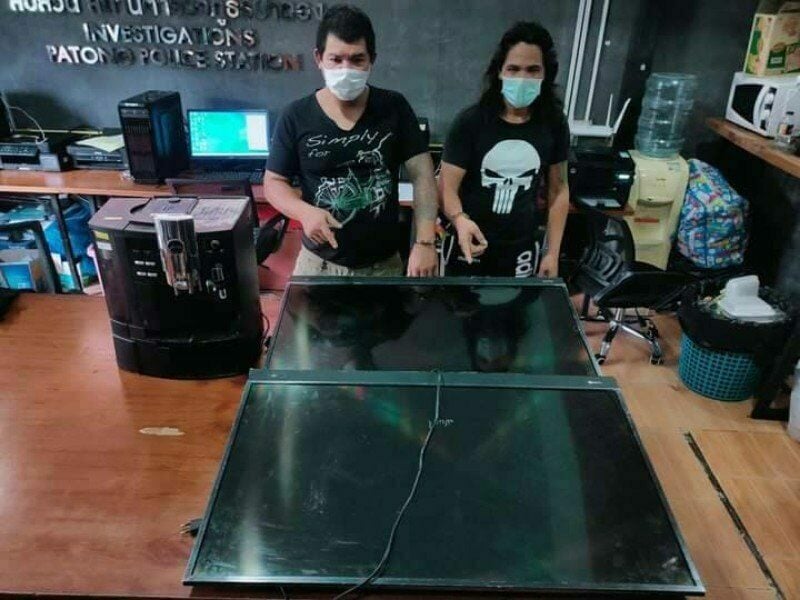 Yesterday morning in Patong, a town in Phuket, 2 men, 42 year old Samran Luiprasert and 34 year old Amphon Boonchuaynamphon, were arrested by Patong police for stealing a coffee machine and 2 televisions from a restaurant. The men said they needed money to survive.

In the police report, it was said the alleged criminals were found after the owner of Safe Number One restaurant filed a police report of the theft from his business.

The police used nearby CCTV footage to identify the alleged thieves leaving the scene on a black Honda PCX motorbike. Further, police identified Amphon by a conspicuous neck tattoo, as well as tattoos on his arms and legs. Police then located Amphon on a building near Phra Mettha Rd.

When questioned, Amphon confessed to the theft, a Jura coffee machine and 2 43-inch Toshiba LED televisions, from Safe Number One restaurant. Amphon also gave up Samran as his alleged accomplice in the crime. Samran was subsequently arrested on a street behind the Government Savings Bank branch, according to the police report.

Both men have confessed to the theft. They reportedly said that they sold the stolen items and divided the money between themselves to pay for necessities they couldn’t afford since being unemployed due to Covid-19.