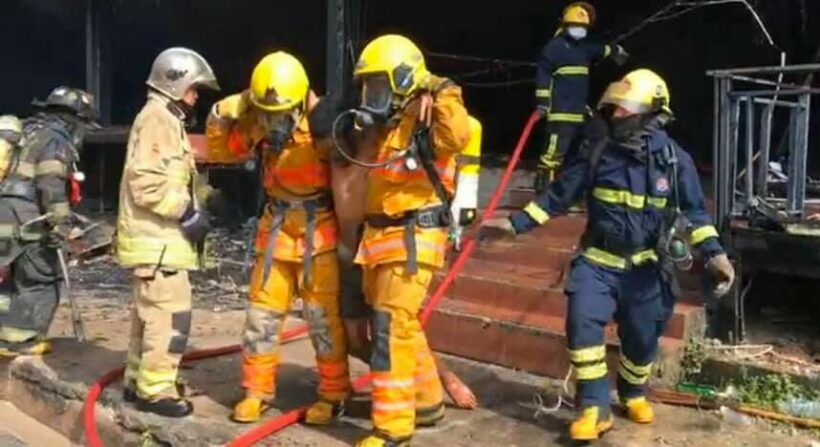 Yesterday morning in Rayong, a province on the Gulf of Thailand, a fire broke out in an entertainment venue that was under renovation. 1 worker was killed and 6 workers were reportedly injured.

Around 8 am yesterday morning the Rayong fire department showed up at the scene, after being alerted to the fire. The fire department discovered a large one story building entertainment venue, “Flick Pub”, that had a large cloud of dense black smoke gushing forth, mixing with the air outside.

Firefighters began to put out the fire. After enough of the fire was put out, they were able to break a wall and gain access to the interior of the building. They were then able to rescue those still trapped inside. 7 people were then found. 1 person was discovered to be suffering from smoke inhalation, as well as burns. En route to a local hospital, he was pronounced dead. His name has been withheld until his relatives have been notified. The other 6 victims were also reportedly suffering from smoke inhalation and were hurried to a local hospital.

It took the fire department around 1 hour to put out the fire. At which point they began their investigation. They noted damage to the furniture inside the building. Also, the building had only 1 entrance and exit which made it difficult for those trapped inside to escape when the fire blocked the 1 entrance/exit.

The fire is still under investigation and the building has been ordered closed. Out of fear of a building collapse, unauthorised people are forbidden to enter the structure.