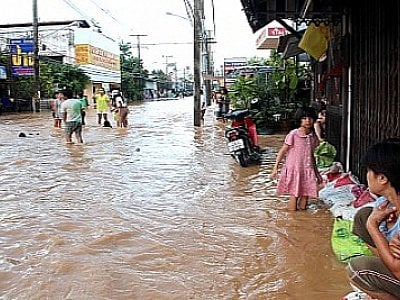 PHUKET: In the wake of floodwaters inundating Phuket Town in August, Phuket City Municipality is looking to spend 100 million baht on flood defense measures, starting with a 10-million-baht study conducted by a private consultant.

The news was delivered at a public meeting chaired by Phuket City Mayor Somjai Suwansupana at the Phuket Merlin Hotel in Phuket Town on Wednesday.

Songkrit Sappakit, executive director of Phisut Technology Co Ltd and head of the project, explained to the gathering that the Phuket City Council had requested 10 million baht from the Phuket Provincial Office.

The money is to fund a study of flood-prevention measures for Phuket Town and its borders with the neighboring areas of Wichit and Rassada.

“The budget that will be spent on the construction project is about 100 million baht. The study is already underway and scheduled to be completed by April 25, 2013,” he added.

The flood-prone areas to gain immediate attention were noted as:

Zone 2: Samkong, at the base of Khao Rang (Rang Hill)

Zone 4: Around Suan Luang park, including Wirat-Hongyok Road to Bangkok Road and along Sakdidet Road bordering Phuket Town and Wichit

Zone 6: Phuket Town, all areas alongside canals and ponds.

Mr Songkrit blamed the clearing and redeveloping of landscapes for new housing estates, among other construction projects, on the outskirts of Phuket Town as the main cause of flooding further toward the heart of the city.

“The run-off from cleared plots enters the canals, making them more shallow. When there’s heavy rain and high tide at the same time, the water cannot flow out fast enough. That’s why flooding has become a major problem in Phuket Town,” Mr Songkrit explained.

“The way to fix the problem is to improve the ability of the canals throughout Phuket Town to have run-off water flow out quickly, and to make sure that the ponds are able to handle large volumes of water. To be able to do this, we need to dredge the canals and the ponds,” he added.

“How we manage the ponds is important. The best way to do it is to use Gam Ling (“Monkey Cheek” detention basins) to hold the extra volumes of water until it can flow out through the canals.

“Man-made canals should also be dug to help the existing natural canals cope with extra run-off. I believe this will help relieve the flood problem,” Mr Songkrit said.

Phuket Sports: Gonzalo has gone and done it again; Golfing tip of the week