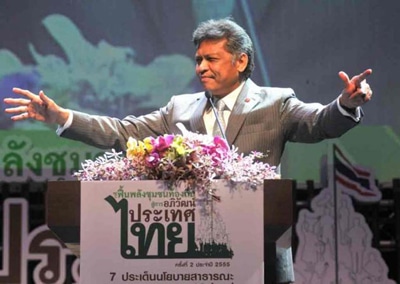 PHUKET: Public Health Ministers and senior officials from the 10 countries in Asean yesterday gathered to discuss ways of tackling chronic noncommunicable diseases, state health-care funds, control of tobacco and alcohol consumption, and the spread of HIV/Aids in urban areas.

The theme of this year’s event is “ASEAN Community 2015: Opportunities and Challenges to Health”.

“ASEAN health ministers are very conscious of their own responsibility to make sure that ASEAN will not only be prosperous, but also healthy,” ASEAN secretary general Surin Pitsuwan, who chaired the meeting, said.

Health ministers will also be advised by health officials, including those from civil society and the private sector, on best practices in health promotion and hear their experiences in containment of diseases.

Public Health Minister Witthaya Buranasiri said the event focused on five main health issues in ASEAN, including access to medical services for patients with noncommunicable diseases such as diabetes and high blood pressure, in a bid to reduce the severity of disease and complications.

The meeting also highlights the use of tax measures as a form of control on tobacco and alcohol consumption, free-trade agreements, as well as regulations banning tobacco and alcohol companies from organizing corporate social responsibility events. Measures to control illegal forms of tobacco are also on the table.

The delegations also discussed ways to implement universal health coverage and HIV/Aids prevention in this region, as well as cooperation to establish field epidemiology training networks.

According to the World Health Organization (WHO), about 36 million people worldwide die from noncommunicable diseases each year. Heart disease is the major cause of global mortality, followed by cancer, chronic obstructive pulmonary disease and diabetes.

To resolve this health problem, Witthaya said, each country needs to issue urgent measures to reduce tobacco and alcohol consumption. They also need to encourage people to do more exercise and strengthen screening measures to identify high risk groups for noncommunicable diseases. Rational drug use also needs to be enhanced.

Witthaya said about 1.5 million people live with HIV in this region. About 1.4 million are adults, and 500,000 of them are female patients. The ministry estimated that about 100,000 people had died from sexually transmitted infections and drug injection.(No time period given)

To tackle these health challenges in ASEAN, the Health Ministers Meeting is expected to announce a joint statement on improving health care services for 600 million people in this region.

In a joint statement on health development, the 10 health ministers committed to discussing a collective stance on universal health coverage at the ASEAN Summit, in the United Nations General Assembly and at the ASEAN+3 meeting.

Secondly, they committed to strengthening the implementation of the United Nations Agreement on noncommunicable diseases based on WHO indicators and goals. Thirdly, they will commit to HIV controls, with the aim of achieving the “triple-zero” targets of no discrimination, no new infections and no deaths from Aids.

Lastly, member states will work together to tackle emerging infectious diseases and other illnesses and problems, such as dengue and malaria resistance, at the root of the problem by encouraging the rational use of drugs and strengthening epidemiology networks in ASEAN.