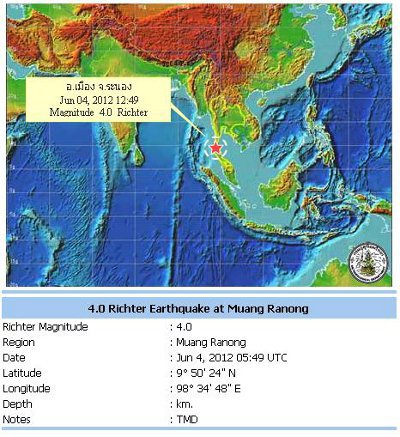 Thailand’s 15th fault-line discovered in Nakhon Nayok Phuket Gazette / The NationPHUKET: A new fault-line, caused by a previous earthquake, was found in Nakhon Nayok province and could be considered the country’s 15th active fault-line, a seminar of geological professionals and related agencies was told recently.

Songpop Polchan, president of the Geological Society of Thailand, said they were planning to propose that the earthquake map be reviewed to cover tambon level risk areas so people can be better prepared and can build structures that are better able to cope with tremors.

The proposal, along with a five point recommendation, will be submitted to the government in two weeks, he said.

As seen from natural disasters over the past four months, including the 4.0 Ritcher quakes in Phuket where 400 homes were affected and Ranong, people start panicking because Thailand still lacks a proper disaster warning system and the public lacked sufficient knowledge, he said. Hence, the experts decided that PM Yingluck Shinawatra and related agencies are given a five-point guideline to mitigate earthquake impacts.

Firstly, the Mineral Resources Department’s (MRD) map of risk zones based on the 14 fault-lines going through 22 provinces only provided provincial-level data and not information about how much risk villages or tambons were facing. Hence studies should be conducted to clarify this issue so that proper criteria can be set for constructing buildings and installing a disaster warning device.

Thirdly, though the Interior Ministry’s regulations for new buildings in risky provinces required that they be strong enough to withstand earthquakes, most old buildings were not built to survive seismic activity, hence the government should provide funding to strengthen hospitals, schools and health centers.

Fourthly, the MRD should educate communities and local administration bodies, as well as provide them with earthquake tackling guidelines. Lastly, the Education Ministry should include an earthquake drill and basic information in primary and secondary school curricula, he added.

Geologist Lerdsin Raksasakulwong said the MRD had been studying the Nakhon Nayok fault-line, which meets with the Mae Ping fault-line at Nakhon Nayok’s Ban Na and Ongkharak districts as well as at Sa Kaew province.

This fault-line could cause some serious damage in case of a major earthquake because it lies near Ayuttahya, Saraburi, Uthai Thani, Lop Buri and Bangkok, he said. He added that geologists had also found some torn layers of sediment indicating a previous movement hence samples were being collected to determine when that quake occurred so future tremors can be predicted.

Lerdsin went on to say that the MRD had made a list of at-risk villages and installed tremor detecting devices along active fault-lines, though residents still had to be properly educated.

“Most deaths during earthquakes result from buildings collapsing onto people,” he said.

He explained that since most houses were half-wood, half-concrete structures with non-flexible concrete beams and ceilings, people living in at-risk areas needed to adjust their houses and use flexible materials such as bamboo. He said people living along the Mae Chan and Mae Ing fault-lines in the North and those living along the Khlong Marui and Ranong faultlines in the South should be the first group to be informed.