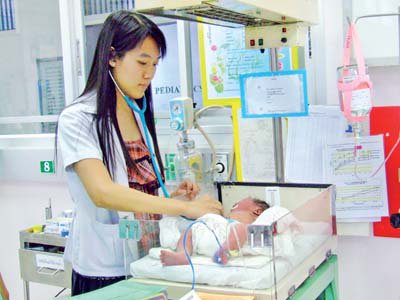 PHUKET: Non-governmental organizations and the academia yesterday spoke up against the Labor Ministry’s plan to deport migrant workers who get pregnant while in Thailand.

The ministry initiated this policy as a response to Thailand’s inclusion, for the third consecutive year, in the United States’ Tier 2 watch-list for countries with human-trafficking issues in its annual Trafficking in Persons (TIP) report.

The three speakers at the forum all agreed that the ministry’s plan would not provide a long term solution. These sentiments were echoed by the Human Rights Watch group’s report published (click here to view) yesterday.

The speakers were Tatiya Likitwong, coordinator of the Foundation for Child Development; Kritaya Archavanitkul, professor for the Institute for Population and Social Research at Mahidol University; and Tatsanai Kantayaporn, representative of the Programmes for Appropriate Technology in Health (PATH).

The discussion was held yesterday at the Thai Journalist Association headquarters.

“This law splits up families, forcing stable couples in Thailand to stay apart for at least six months,” Tatiya said. “Then, if the children are left behind with relatives in their home countries, they grow up without proper resources and end up causing more problems in the future by either getting trafficked or working as traffickers.

“This policy is championed as an effective way to fight child labor, but there are much better ways than this one, like the Education Ministry’s recently drafted plan allowing any child, regardless of citizenship or legal status, to go to school.”

Kritaya, meanwhile, talked about the danger of making more migrants cross Thai borders, even if it is to their own home country.

“This policy promotes the crossing of the border, so pregnant mothers will return to Thailand after delivering their baby at home. Research shows that people crossing the border have a lot to do with human trafficking. Hence, when a young woman crosses the border with a baby, claiming it is hers, it is very difficult to verify if she is really the mother.”

Tatsanai also questioned the plan’s appropriateness as a response to the TIP report. “Responding to the report is important because there are economic and political ramifications for a nation to be considered a human-trafficking center, but – as far as I can remember – there is only one mention of child labor in the report.”