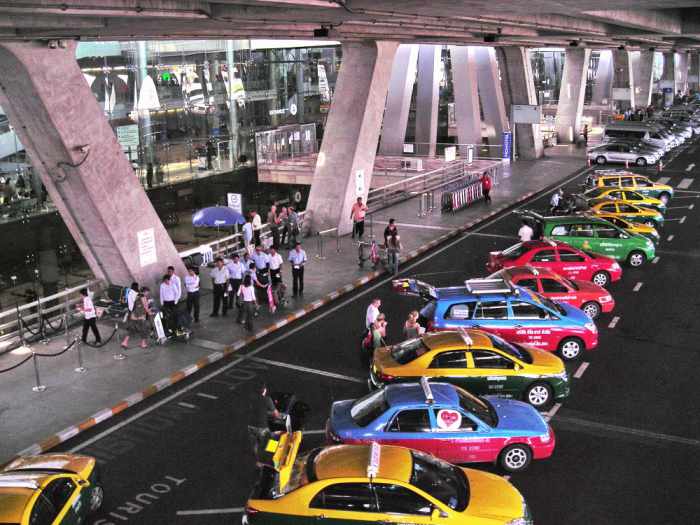 PHUKET: The National Council for Peace and Order (NCPO) will introduce a smart-card system for the taxi queue at Suvarnabhumi Airport in a bid to end the “mafia-style operation” there.

A computerised system, linked to the database of registered taxi drivers’ personal history and fingerprints, will issue queue cards to taxis waiting to pick up passengers from the airport.

He said the “mafia-style operation” allowed taxi drivers to select long-haul passengers and such selective services make it hard for short-haul passengers to get a taxi ride.

A short ride from the airport starts from just 35 baht, while a ride to faraway destinations such as Pattaya can earn a taxi driver up to 3,000 baht.

“In addition to this, we have also received complaints about taxis leaving passengers midway, overcharging, lack of manners and involvement in illegal activities,” Nirundorn said.

The swift move to regulate taxi services at Suvarnabhumi Airport is in response to NCPO chief General Prayut Chan-ocha’s policy to bring about reforms.

“We have decided to act at Suvarnabhumi Airport first so as to bolster the image of this international airport and Thailand,” Nirundorn said.

Normally, people can get a taxi ride out of Suvarnabhumi Airport by queuing up at a taxi counter on the facility’s first floor.

After informing the staff at the counter where they want to go, the staff will tell them which cab they can get in. Each ride via the counter – which records the taxi’s licence plate number and passenger details – comes with an additional charge of 50 baht, which is legally allowed.

Passengers who wish to avoid the additional charge can get a taxi from the fourth floor of the airport where departure air passengers arrive, many of them by taxi. Passengers who opt for this option have to flag down the taxi themselves.

Nirundorn said many taxi-related problems happened because of “mafia-style operations”. According to him, some 7,000 taxis have been serving passengers from Suvarnabhumi Airport.

He estimated that men in uniforms were behind the “mafia-style operations”, saying that he knew who were involved.

“At this point, we are simply asking for cooperation,” he said.

He hinted that if those involved were not cooperative, soldiers might be dispatched to monitor taxi counters at the airport.

Nirundorn is also considering a move to propose an amendment to the Airport Act, which does not cover the relatively new Suvarnabhumi Airport, so as to find long-term measures to prevent mafia figures from re-entering this large aviation facility.

“We need to do something. Or else, the mafia-style operations will return as soon as the soldiers leave,” he said.