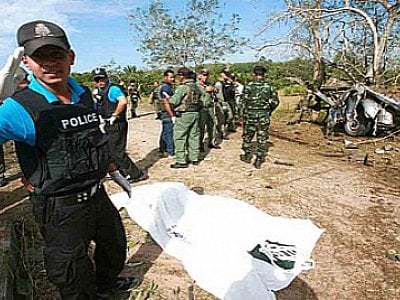 PHUKET: Five police officers were killed yesterday and another wounded by a car bomb attack in Yala’s Raman district.

The six man squad from Tha Thong Police Station, which was assigned to escort teachers at U Poh Shool, was on a mobile patrol before arriving near a bridge where a pickup truck with hidden explosives was parked. The truck exploded, hitting the police vehicle.

A manhunt was ordered on suspicion that wanted insurgent Kaman Chaichana, who has been active in the district, was also behind this ambush.

The detonation was remote, either by wire, mobile phone or two-way radio. The type and quantity of explosives used in the attack have not yet been identified.

The relief force and bomb disposal team dispatched to the scene were delayed by road spikes scattered by insurgents, who also made off with six assault rifles issued to the patrol officers.

Pol Corporal Jakkrit Chasalee was hospitalised, but no details of his wounds were available.

Yesterday’s attack is the deadliest since the bomb blast in Yala’s shopping district in March, which killed eight and left more than 69 injured.

Here is a chronology of recent activity of the insurgents in Thailand’s southern provinces:

JULY 3: A homemade bomb hidden in a bicycle’s front basket goes off and injures five soldiers in Yala’s Muang district.

JULY 13: Homemade bombs planted at four ATM units in Yala’s Bannang Sata district and an M79 grenade attack on a security outpost wound one civilian and one policeman.

JULY 19: A bomb explodes at a shop in downtown Pattani, but nobody is hurt. A bomb in Yala’s Than To district kills a villager and wounds another. A bomb is found after an ambush on villagers is carried out to draw security officials in Narathiwat’s Si Sakhon district

JULY 20: On the first day of Ramadan, a 50 kilogram bomb hits a military vehicle on patrol in Narathiwat’s Rangae district and wounds seven military rangers. A car bomb goes off in downtown Sungai Kolok in Narathiwat, burning down four shophouses and wounding eight people

JULY 25 (yesterday): A bomb hidden inside a parked pickup truck goes off in Yala’s Raman district and hits a vehicle carrying policemen escorting teachers. Five of the occupants are killed and one wounded.

PHUKET: The Meteorological Department yesterday warned that Depression Vicente, downgraded from tropical storm status over China, would cause heavy rains and possible flash floods in lowland areas near waterways in the North and the Northeast until tomorrow.

In the northern province of Mae Hong Son, a landslide triggered by rain has blocked the road leading to a hill tribe village in Sop Moei district. The local authorities will use a backhoe to clear the road.

Farmland in Pai district has been submerged due to the heavy downpour. In Chiang Rai, local residents in risk areas have been warned of likely flash floods and mudslides.

Flash flooding from the upstream level of waterways in Phichit has led to off-season paddy fields going under water. The local irrigation office has opened sluice gates to speed up the release of water to the Yom River, which has the capacity to receive it.

The strong southwest monsoon over the Andaman Sea, mainland Thailand and the Gulf of Thailand has resulted in waves 2-3 meters high and will continue to the weekend.

All shipping is advised to use caution and small boats should stay ashore, the department warned on its website.

PHUKET: The Foreign Ministry has facilitated the evacuation of 17 Thai students from Syria’s capital Damascus, which has been rocked by violence in recent weeks.

The group is expected to arrive in Bangkok next Wednesday, Thai Foreign Minister Surapong Tohvichakchaikul said.

The ministry, which contacted the Thai honorary consulate in Damascus to help evacuate the students, provided them with air tickets.

Surapong said there are some 50 Thais in Damuscus, some of them women married to Syrians. They did not want to leave.

Earlier, the Thai Labour Department had said no Thai labourers were currently working in the Syrian Arab Republic, where fierce fighting and other violence is now endemic.

Some 13 Thai labourers, who had been permitted to work in restaurants and Thai-style massage parlours there since 2009, returned to Thailand several months ago.

No other skilled Thai workers have been employed in Syria. The country suspended construction related employment as it has had no city or industrial development plans for many years.