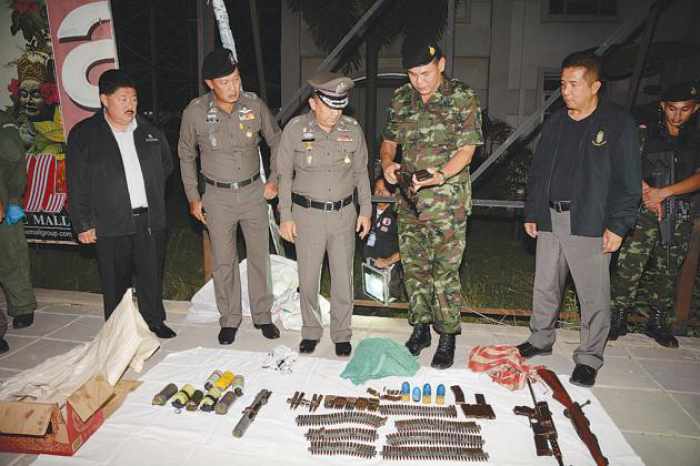 PHUKET: The junta is preparing to launch a major offensive on war-grade weapons possession after the amnesty ended yesterday, when several caches of arms found abandoned in several locations across the country.

In Chiang Mai, a stash of munitions and explosives was found abandoned at the home of a former Army officer. The items included nine anti-personnel mines, four TNT explosive bars and a few ammunition rounds. Army explosives personnel said the mines and the TNT remained active despite being of advanced age.

A large hoard of weapons was also found abandoned recently in Chon Buri. It included four handguns, an AK-47 assault rifle and a large amount of ammunition.

Senior commander Pol Maj-General Sanit Mahathaworn said at a press conference yesterday that these weapons had not been prepared to instigate politically motivated violence. The military and the police have also been active in taking down criminals and drug traffickers who use weapons, in addition to conducting raids and making arrests in pre-crackdown campaigns.

Acting National Police chief Pol General Watcharapol Prasarnrajkit said all the weapons would be inspected to see if they had been used previously, and they might later be demolished.

He added that the police would also kick off their own crackdown from today, with a special focus on narcotics and vice.

In Surat Thani, the military, police and provincial civilian authorities held a press conference yesterday to instruct all 1,035 kamnan and village heads to continue reconciliatory campaigns in cooperation with more than 200 government agencies and local administrative bodies.

The provincial military chief, Maj-General Ranchat Jinda-ngern, encouraged people possessing war weapons to continue dumping them and warned that those who refuse to give up their weapons would end up in military court.