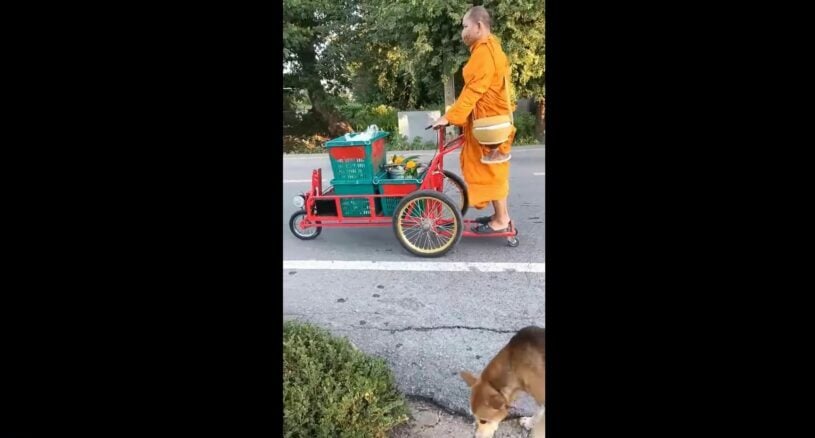 A monk in the central Thai province of Ang Thong is being chastised by his higher-ups for using an electric cart to expedite his morning alms. The higher-ups have called his actions “inappropriate”.

Wanchai Dhammatharo of Ang Thong City’s Wat Channimitr has been ordered by the chief of the Ang Thong Provincial Office of Buddhism, Sakdanai Woradetch, and Sakdani’s team to stop using the wheeled trolley to expedite his morning alms.

Sakdanai says Wanchai’s behaviour was “imprudent” and “inappropriate” for a Buddhist monk.

Wanchai says he has been using his wheeled contrivance for his morning alms for around 2 months. He cites the route’s length, 6 kilometres, as the reason for his alms shortcut.

While Wanchai’s decision making surrounding his morning alms routine is looked at unfavourably by other monks, non-monks chimed in online to condone the monk’s ingenuity.

One Facebook user, Neunghathaichok Sirimongkolsub, says it was a good idea because Wanchai’s method meant he didn’t need a temple follower to assist in carrying food. Also, that the trolley has superior food carrying abilities.

Another Facebook commenter, Sumi Sensai, says that if Wanchai’s use of a “labor-saving device” enables his life to be more convenient… the monk authorities should allow it. Further, that if monks are required to carry stuff and walk 6 kilometres, eventually there will not be “any monks left”. It was not immediately clear if Sumi meant monks would be attacked by soi dogs, have another tragedy befall them, or they’d merely quit being a monk.

Dedinbed
2 minutes ago, gummy said: Guess he keeps that out of sight As far as I know Phrae Sukphol ( the dude in the pic' ) was defrocked for his less the devout ways and the motors taken from him…

gummy
9 minutes ago, Dedinbed said: As far as I know Phrae Sukphol ( the dude in the pic' ) was defrocked for his less the devout ways and the motors taken from him .. love to know where he got…
Stonker
One monk I pass every day on my cycle ride lives on his own about 5 kms from the nearest village, and he used to walk.  Now someone gave him an electric three-wheeler and no-one sees anything wrong.   Others…
Graham
Don't see what the issue is, he can collect more and with the transportation being electric it's good for the environment.  Better than being transported in the back of a smoke belching pickup truck.
Changnam43
That contraption needs some alloy wheels and smattering of stickers.  Liverpool FC, VIP Karaoke, etc. Perhaps a Mountain Dew bottle hanging from the back.