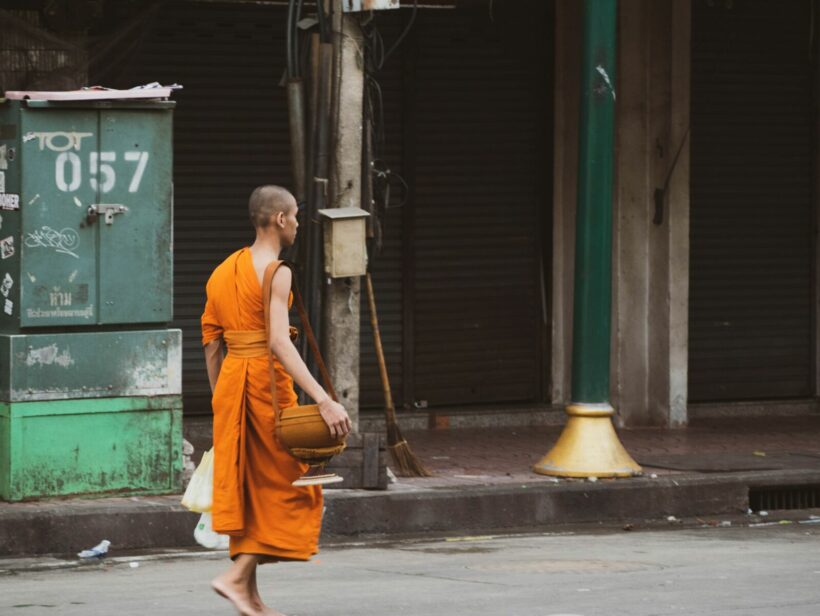 Photo via Rob King via Unsplash.

Phra Charan, a 70 year old monk, was killed in a hit in Bangkok, yesterday. Phra had been a monk for years at the Wat Son temple.

30 metres from the monk’s body pieces of a “black car” were recovered, presumably from the car that struck Phra.

When rescue workers arrived at the scene they found Phra’s head and leg bloodied.

The monk’s son, 47 year old Chaloem Chai, and his 26 year old granddaughter Angkana, were notified of the incident. Subsequently, they went to the scene of the accident to see their relative’s body. The sight put both family members in shock and the granddaughter reportedly fainted onto the road.

Nearby security cameras caught the accident on film. Eyewitnesses were also present. One witness, 48 year old Lapatlada, a food vendor, said she was cooking when she heard a loud braking sound. She looked to where she heard the sound and saw a black truck strike Phra Charan head-on. She said Phra’s body shot into the air before collapsing onto the road. She added that the truck did not stop after hitting Phra.

Chaloem said he used to wait, every day, on his motorbike at 6 am for his father to cross the road. He said that his father was unable to cross the nearby bridge due to his arthritis.

The monk’s body was taken to the Siriraj Hospital.

joseph
The "Boss" is back.
TobyAndrews
It seems all his Karma did not save him. However the Christian church suffer the same betrayals by the higher beings as the Buddhists. I trust my destiny to my rabbit's foot.

King Cotton
8 hours ago, joseph said: The "Boss" is back. Yes, maybe . . . Watch your backs! Hello joseph and welcome to T-T! Please feel free to tell us a bit about yourself in 'Introductions'. It's good to pick-up on those…