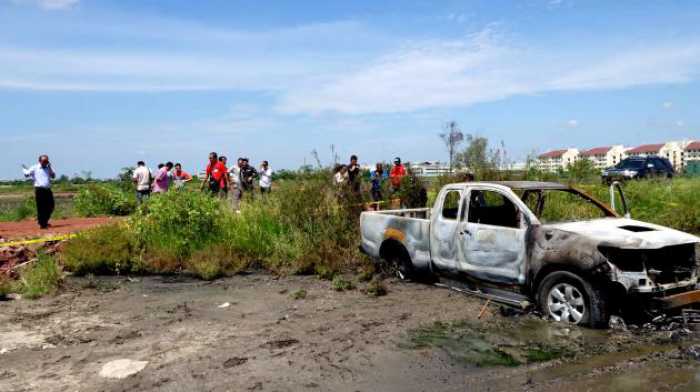 PHUKET: Police have arrested a man with a history of drug use and mental illness after he allegedly stabbed to death his wife and daughter and then burned their bodies in his pickup truck on a Samut Sakhon road on Friday night.

Chumphon and Samut Sakhon police jointly apprehended Rames Rattana, 37, on Saturday when someone saw him lurking around a vehicle parked at a major intersection in Chumphon, his home province, and called police. It was unclear if Rames had been charged as of yesterday.

Police said Rames’ relatives told them that he suffered from stress and used narcotics before undergoing therapy two years ago.

Police quoted Rames as saying he stabbed his wife, Orawan Rattana, 37, and his daughter, Thipasksorn Rattana, 12, after fighting with his wife over whether the family would keep travelling from Samut Sakhon to Chumphon.

They were travelling in the pickup truck off Rama II Road in Muang district and he pulled over and they got out of the car.

Police said he told them that his daughter Thipasksorn Rattana, 12, was stabbed accidentally after trying to block him from stabbing her mother. He was not sure where his daughter was stabbed.

He was carrying his daughter to the vehicle and his wife tried to take her away from him and he stabbed her.

Police said he told them that he tried to drive his daughter to hospital, but the vehicle got bogged. He then set fire to the vehicle and fled before stealing a motorcycle and riding it to Chumphon. When it ran out of fuel he stole another motorcycle in Chumphon. He planned to ride it through a military barracks there but suspected it may belong to a soldier so he abandoned it.

Rames then tried to steal a car and was arrested.

German ‘beggar’ to be deported