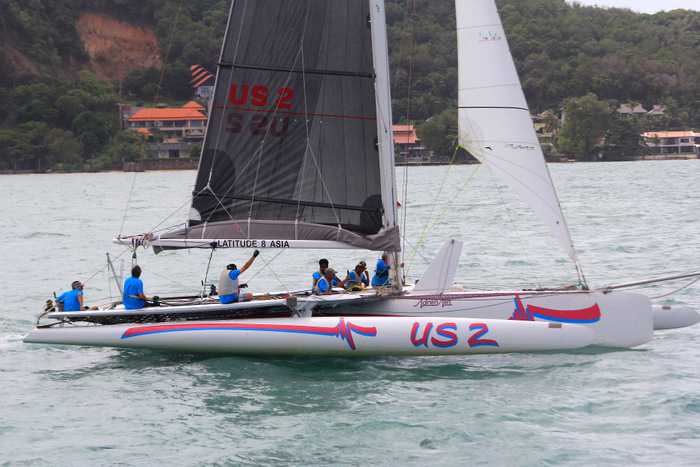 PHUKET: Light winds that built to around 10 knots over the course and a picture postcard sunny day yesterday saw sailors in the Ao Chalong Yacht Club (ACYC) race series finish within seconds of each other on corrected times.

In the multihull division, a 30º wind shift at the start favored Hurricane and Adrenaline, while disadvantaging back-runners Nina and Galeforce, who were forced to throw an extra tack in to make it around Koh Lon island.

Two tough battles shaped up on the water, with the lead boats crossing tacks within a few meters of each other and the back-runners swapping places all along the course.

It was close quarters for Hurricane and Adrenaline for most, if not all, of the race, including a call for water by the Adrenaline crew in the shallows off Koh Lon.

Hurricane skipper Alan Carwardine – although not obliged to – gave room for Adrenaline to move through safely, much to the relief of the pleading crew of Adrenaline.

Yet, by race’s end, it was Adrenaline that was declared winner in the Multihull Racing Division, completing the course three minutes ahead of Hurricane on corrected time.

Finishing only 30 seconds behind Hurricane on corrected time was Nina. Asked by ACYC Commodore Mick Keally where the 30 seconds could have been saved, Nina skipper Grenville Fordham let out a grumble about the foredeck hoisting the small spinnaker by mistake – and something about Nina having a dirty bottom.

Bill Sax’s Astraeus bobbed along the course at its own pace all on its lonesome in the Cruising Monohull division. Astraeus was a guaranteed winner in her class being the only monohull competing.

Guests are welcome at the ACYC and anyone wishing to go out sailing. To join one of the yachts racing in the next ACYC race on Sunday, October 12, pop down to the ACYC clubhouse at about 10am. If you are not up to racing just pop down for the Sunday roast.