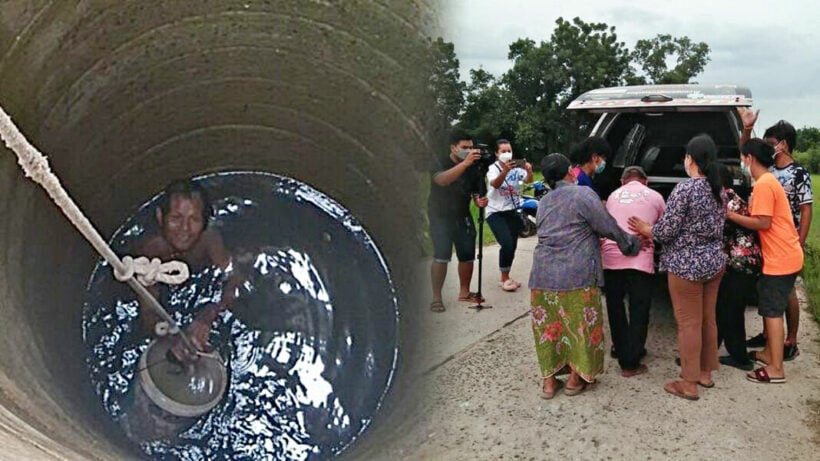 PHOTO: The man who went viral after falling down a well and being spotted online by his estranged family has been reunited with them. (via Khaosod/Pattaya News)

They say all’s well that ends well, but sometimes all’s well that begins [in a] well. The bizarre story of a man missing for 15 years being found after going viral because he fell in a well now has come to a happy resolution as he was reunited with his long-lost family.

15 years ago Lamead Mueanmai was 40 years old and went missing, and since his body was never found, his family never gave up hope that he was alive somewhere and they would one day find him again. Then a few weeks ago, Lamead, now 55 years old was looking down into a well in Sattahip in Chon Buri province and lost his balance and plummeted to the bottom. After 5 hours of shouting for help, someone found him and called for help.

The story of his rescue and the photos of him at the bottom of the well were reported on a local community Facebook and in turn went viral online. It eventually made its way to his family in Surin who spotted their long lost relative and contacted the original Facebook page. Officials found the man who tearfully made a video call to his family he hadn’t seen or spoken to in 15 years, and the officials pledged to see him reunited.

However, Covid-19 stood in the way of a quick trip, as Chon Buri is now a dark red zone and travel is limited. Yesterday though officials announced that Lamead has tested negative for Covid-19 and would be sent on his way to see his family. He was transported to Prachin Buri by a municipality government car where Surin rescue workers picked him up and brought him to be reunited to his family.

Lamead declined to comment about what he’s been up to for 15 years and why he hasn’t contacted his family, and at the time he fell in the well he was living in a run-down shack at the edge of town and mostly kept to himself living off the land. His absence is mysterious, as neither he nor his reunited family seems to bear any ill will towards each other.

The man was brought to his family earlier in a joyous reunion and they expressed thanks to all the people in Sattahip and Surin who helped bring the family back together to be reunited.