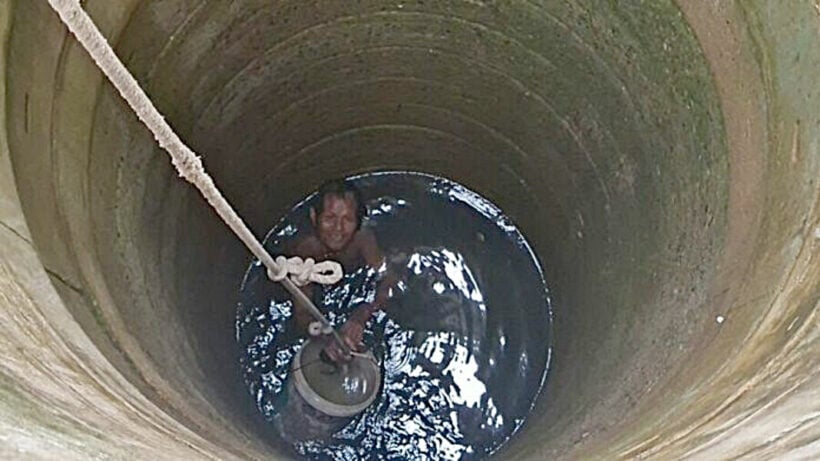 PHOTO: Man lost for 15 years is found after falling down a well. (via Khaosod)

They say when you lose something valuable you’ll often find it in the place you’d least expect it. That certainly turned out to be true for a family with an estranged uncle who they had lost 15 years ago who was reunited with them after a freak accident that found the man at the bottom of the well in Sattahip.

The family said the man, now 55 years old, had been lost in Surin in 2006 when his phone number changed and they lost all contact. They never found any report of his death, so they kept hope for years that he was alive somewhere. It turns out they were right, he was alive and had been living in a shack at the edge of the town of Kled Kaew Municipality in Sattahip district, Chon Buri. Locals say he mostly lived off the land and kept to himself, never really attracting attention.

Until one fateful day last week on July 23 when he really needed attention. He had been peering into a well nearby when he accidentally fell in, plummeting 17 meters to the bottom. He screamed and shouted for help for hours hoping someone would pass by and hear him. Finally, someone heard him 5 hours in and contacted rescue officials who arrived a short time later and spent 15 minutes extracting the man from the bottom of the well with a rope.

The story and photos of his rescue were posted to the municipality’s Facebook and quickly went viral. As the story and photos of the man spread, the family over 400 km away were shocked to see their long lost uncle at the bottom of the well. They contacted the Facebook page explaining it was their long lost uncle who they have been searching for after losing contact and they were desperate to reconnect with him.

The Village Chief of Kled Kaew went to visit the man at his home and, while the man wouldn’t give details of why he was lost for 15 years or details of his estrangement, he was interested in reconnecting with his family. They made a video call and tears flowed as the man was reacquainted with the family he hadn’t seen in a decade and a half.

Local authorities are working to get the long lost man Covid-19 tested and then once it was safe, transport him to Surin to be reunited with his family.

Peter
Wait. Let me get this straight. A relative just wonders off one day. Settles in a different town 400 km away from his wondering point-of-origin. This relative is not heard from for 15 years. One day, he peers down a…

Bluesofa
7 minutes ago, Peter said: Wait. Let me get this straight. A relative just wonders off one day. Settles in a different town 400 km away from his wondering point-of-origin. This relative is not heard from for 15 years. One…
Peter
3 minutes ago, Bluesofa said: The answer is much shorter: Exactly. That refusal is not an answer. Hence so many unanswered questions.

Bluesofa
1 minute ago, Peter said: Exactly. That refusal is not an answer. Hence so many unanswered questions. Maybe you'll get your chance with the interrogation spotlight later? ?

billywillyjones
Maybe he was anticipating the government's next quarantine order and just wanted to be one step ahead.?