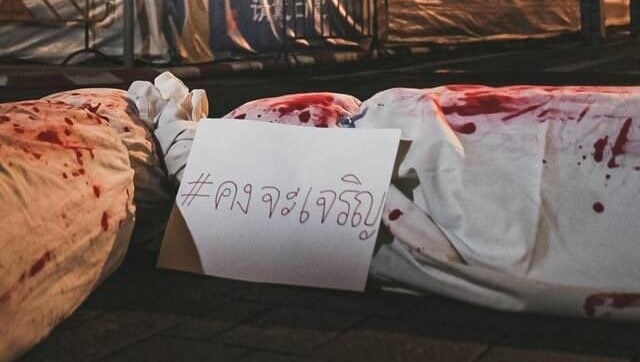 Phuket police are investigating staged protest photos that depict bodies left on Phuket Town streets. The “bodies” are covered in white shrouds and covered in fake blood. The fake dead bodies are meant as a protest against the government’s handling of the Covid situation.

Akkaradet Pongprom, from the Phuket City Police, says that a formal complaint about the photos was lodged by local resident, 41 year old Kittisak Siangsalak, this morning around 10 am.

Last night, the photos were shared by the local political activist group “Phuket Free Youth” through their Facebook page. The post also contained the message, in an echo of the anonymous “Dr Sandy” Facebook post, that the number of dead is more than a number, they represent human lives. Lives that may be loved ones or people who contributed to society, but authority figures “cannot do anything to resolve this problem”, says the post.

The post further reads that the group extends their condolences and sympathies to the victims of Covid and that, “This is an exhibition, not using real dead bodies. If the government takes too slow to solve the problem, there will be more photos like these coming out with real dead bodies #Phuketfree #Kongjacharoen,” says the post.

Akkaradet took the complaint and says the Facebook post/protest using mock dead bodies, garnered much attention and was widely shared, thus it, the staged protest, can result in a misunderstanding and damage Phuket’s image.

Therefore, the images can be interpreted as disseminated false information into a computer network. Further, that the post can be seen as affecting the stability of Thailand and could cause people to panic.

The officer’s words relating to the “stability of Thailand” spreading false information, which can “cause panic” are nearly verbatim to the warning to the media that it is banned from publishing/broadcasting information that foments fear or has the intention of distorting information and causes confusion”, which the report says may affect national security/stability, the order went into effect, today.

Phuket Provincial Police Deputy Commander Col Aganit Danpitaksat spoke to the press this morning and said police are looking into whether the pictures were snapped at the actual location or merely edited to create “fake news”.

The Phuket office of the Public Relations Department agrees with Aganit’s line of thinking and have appointed the scarlet letter “F” for fake news to the post. PR Phuket went on to say that there are no dead bodies in Phuket Town’s streets.

billybob
5 hours ago, BookShe said: Thais don't know about this idiot admin Metisdead so how can they hate him? There is a parallel universe where the tables are turned and metisdead is Apirat . He is therefore hated in both universes by both…

billybob
Cod Satrusayang states that this is “the move of a desperate government that has lost much of its legitimacy and all of its trust with the people that it has failed.” He continues: This is Pxxxxx now, defeated but still…

HappyExpat
14 hours ago, BookShe said: Thais don't know about this idiot admin Metisdead so how can they hate him?
Stardust
16 hours ago, MrStretch said: This regime has no interest in the truth being shown, no interest in other opinions, criticism about their performance or anything that is not shining their knob. Latest case in point is the "photo protest"…
Stardust
8 hours ago, billybob said: There is a parallel universe where the tables are turned and metisdead is Apirat . He is therefore hated in both universes by both falang and Thai.  And they talk about reputation and even realize that theor…