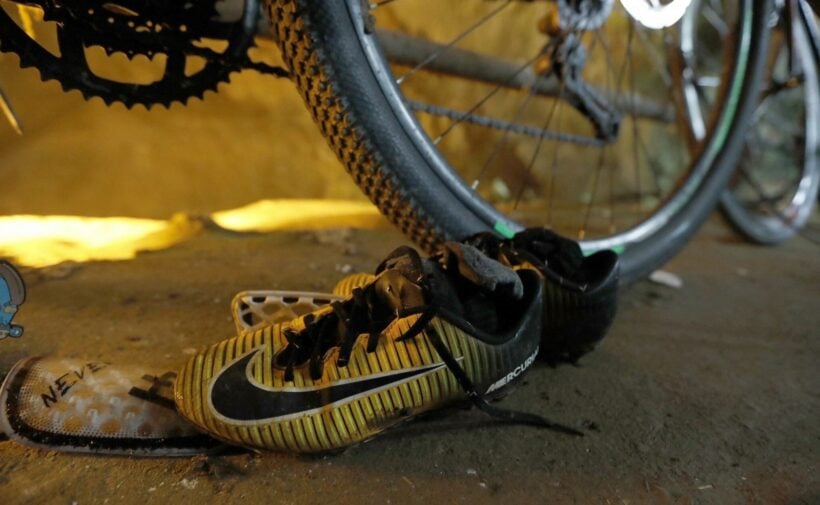 Now into the ninth day. Hopes and prayers unanswered.

The 12 teenagers and their coach went into the caves last Saturday afternoon (June 23) following their weekly practice. We are told they were carrying with them basic provisions, water and a first aid kit. Any provisions would now be long finished. Luckily water is in plentiful supply.

But, without some tangible signs of life in the next day or so, hope will quickly slip away and the rescue mission will swing into a mission to recover the bodies. Of course there is still a strong likelihood that the 13 can still be found alive.

But time is running out.

Seven days in the dark, wondering if help is on its way would be a terrifying ordeal. The team, know locally as the Wild Boars, are a close-knit group according to their parents and friends. The team are all aged 11 to 16 years old. The coach with them is 23. It wasn’t their first trip to the caves – like most locals they knew a bit about their way around the first sections of the famous cave system. But in seven days nothing has been heard of the team.

The dramatic entrance leads into the first kilometre which features limestone rock formations and high ceilings. Past this point the passages narrow and the locals know that’s as far as you should go unless you have proper training and experience.

The group ventured past this point passing signs that warn not to enter during the wet season. Whilst they were inside it started raining. And raining. They couldn’t go back to the entrance, the only way was to go further into the bowels of the mountain, deeper into the seven kilometre-long Tham Luang Nang Non cave.

The park closed to the public at 5,30pm but the park ranger noticed the parked bikes, back-packs and shoes at the entrance and contacted the police. The search began immediately, although there was little anyone could do with the access-way flooded.

The tentative early search has now grown into a team of hundreds, many with specific expertise in caving, some with detailed knowledge of the Tham Luang caves. Personnel and equipment have been flying in daily, drones have been scouring access into the caves from above, Navy SEALS have been pushing deep into the muddy waters, trying to progress their search towards where they believe the team is waiting.

Meanwhile the waiting families have been getting increasingly desperate, hanging onto every word from emerging rescuers and pushing officials for information. Some have had to be taken to hospital suffering exhaustion, panic and stress. Officials have now set-up a special tent so the families can stay on site and keep abreast of any developments, any trace of good news. Monks and counsellors are spending time with them, partly as a distraction but also for religious and moral support.

A British caver and long-time resident of Chiang Rai told CNN that, “…it’s not a hard cave, it’s just very long and it has big passages, small passages. It’s not difficult but if the children have gone in too far then the floodwaters from the far end will be coming through. With the rain, it’s not making it any easier.”

The main issue, from day one, was trying to get the water, flooding into the caves, out. But as soon as the pumps made any headway, new rains would bring more water. Special pumps, usually used to handle floods in the capital, were brought up from Bangkok, but even they’ve been struggling to keep ahead of mother nature.

There are hundreds of Thai media, now under strict orders to ‘behave’ and stop intruding on the rescue workers and families. The moment any sign of life emerges from the Tham Luang caves we will all know – with the speed of social and electronic media delivering the news in real time.

We hope that moment will arrive swiftly. We also hope the forlorn sets of soccer shoes, still sitting at the mouth of the cave with the team’s bikes, will get some serious use with the Wild Boars again soon.