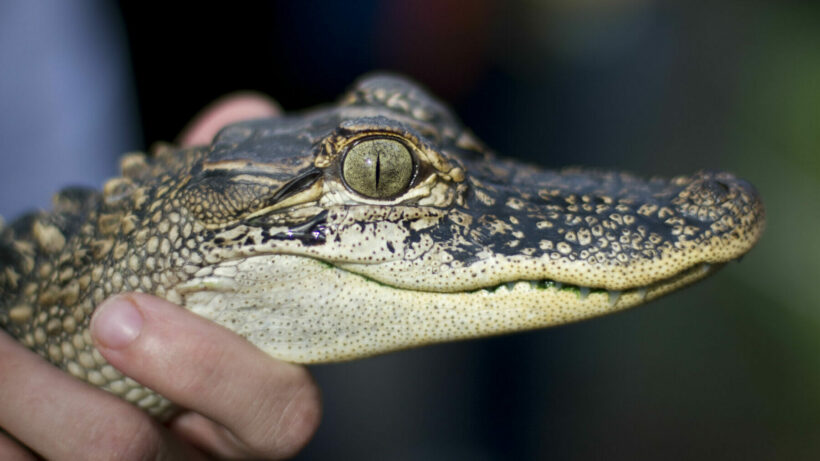 Inhabitants of Si Racha, a district in the Chon Buri province, were taken aback to find 2 baby crocodiles lounging in a public park’s lagoon.

A security guard, 52 year old Panna Poompanieng, discovered the 2 baby crocodiles. However, the local residents believe there may be even more scaled reptiles lurking in the lagoon.

Panna, who guards the public park located in the Chao Phraya Surasak Municipality, tells local media that he patrols the area throughout the week. Recently, he happened to notice a fish trap, which is against park policy, close to the lagoon. So, he then made his way down to the waterside to retrieve the trap.

“Imagine my surprise when the trap and area nearby had two very young crocodiles swimming around the vicinity”, says Panna. He then showed off his herpetological knowledge by saying he believes the 2 crocodiles he found were not alone because a mother crocodile usually births between 8 to 10 hatchlings at a time.

He adds that environmental authorities now have to inspect the lagoon to determine if there is a large crocodile also lurking in the lagoon depths. Panna says the authorities need to find out before locals can fish or swim in the area again.

Local officials have not divulged what happened to the baby crocodiles. Nor have they said if they are looking for the person who put up the illicit fish trap that kicked off the crocodile discovery.

Earlier today, the Thaiger wrote how a crocodile of unknown origins has also been found in a Chiang Mai forest. Last month, a rash of crocodiles also escaped a crocodile farm in Trat.

Dedinbed
37 minutes ago, Thaiger said: aback to find 2 baby crocodiles lounging in a public park’s lagoon. They must be lounge lizards cousins then ..
MikeTexas
LOL they are all over where I walk in a park nearby. Harmless until they get over 6ft. At that point they like dogs for dinner.

bushav8r
they are attracted to little snakes...jut keep it in your panties