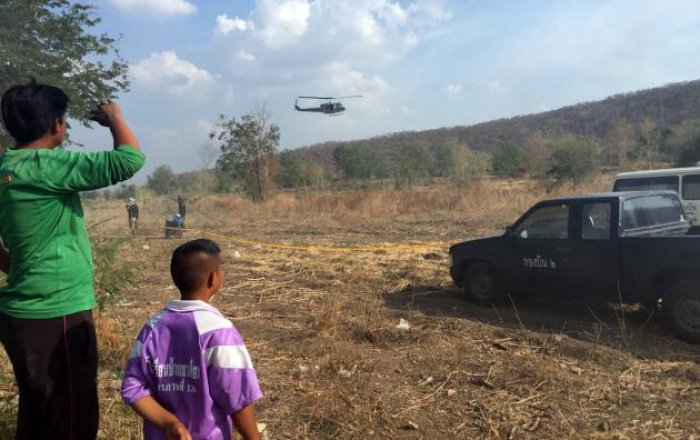 PHUKET: The body of the Royal Thai Air Force F-16 pilot who was killed when his jet crashed in Lop Buri province on Friday will be brought to Bangkok today, Air Force spokesman Montol Sutchukorn said yesterday.

The Air Force will also organize a guard of honor – presided over by Air Force chief ACM Tritos Sonjaeng – to receive the body of Flight Lieutenant Noppanont Niwasanont of Nakhon Ratchasima’s Wing 1.

His funeral will be held at Wat Phra Si Mahathat in Bang Khen district and evening prayers will be sponsored by the Air Force until February 28. His royally sponsored cremation will be held on Sunday March 1 at the same temple.

Noppanont will be promoted posthumously to the post of Group Captain and entitled to a special seven-step pension, while his family will also be granted 2.4 million baht in aid money, Montol added.

Meanwhile, Air Force flight safety officers and their colleagues from Wing 1 inspected the scene of the accident yesterday to determine the cause of the crash, which was initially blamed on engine malfunction.

Noppanont was flying the jet as part of an air-to-ground attack exercise and unable to eject when the jet crashed in a field in Khok Samrong district in Lop Buri province at 2.50pm on Friday.