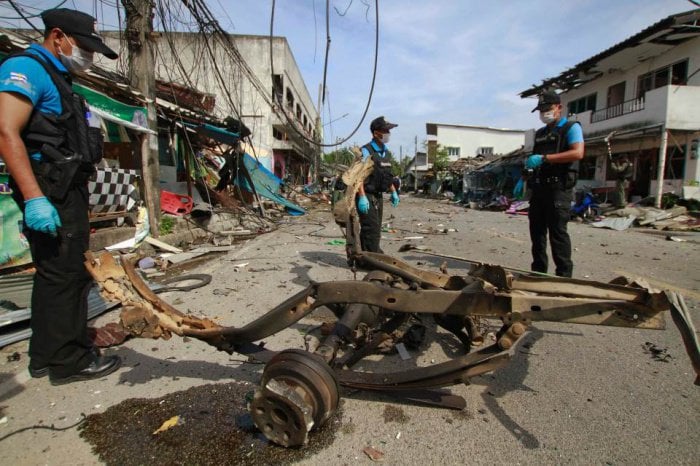 PHUKET: Police said yesterday they have identified two out of the five or six militants behind the huge car-bomb in Narathiwat on Friday, even though information from 22 eyewitnesses was sketchy and of little use for investigators.

Deputy police chief Gen Jakthip Chaijinda said police would be in a position to seek court-issued arrest warrants for the suspects in a few weeks.

The forensics team had collected evidence from the scene and linked that with some intelligence to get a big picture of the attack, leading to a group of five or six suspects, he said.

Gen Jakthip did not reveal any clear information about the suspects but a police officer in Narathiwat said the suspects were operatives under Abdullah Urae’s unit, which stole the pickup truck from Songkhla that was used to make the car bomb.

The vehicle was the same one mobilized in an attack on the Makud Tambon Administration Office in Pattani’s Khok Pho district recently before it was turned into a car bomb.

Abdullah was already wanted in connection with the earlier attack, said the police source, adding that Gen Jakthip gave clear instructions in a meeting with senior police in Narathiwat yesterday to exert all efforts into arresting Abdullah.

However, an interrogation officer at the Narathiwat provincial police office said police had questioned 22 eyewitnesses, who were also victims of the bombing, but obtained no significant information for the case.

All had not paid attention to when the car loaded with explosives was brought into the area, said the officer, Pol Lt Sunet Thien-udom.

Such information could not lead to the arrest of anybody, he said.

The car bomb damaged dozens of homes and wounded 13 people, four of them seriously. As of yesterday, 10 were still in the hospital and Sergeant Korakot Korthong remained in intensive care.

The bomb was hidden in a pickup parked in front of a karaoke bar, not far from a Chinese shrine. The blast was detonated early in the afternoon. With an estimated 50kg of explosive it did major damage in the downtown area of the town in the far South.

Police yesterday warned of another possible car bomb attack in the southern commercial hub of Hat Yai in Songkhla. Officials beefed up security in the district by setting up checkpoints at 38 places in the town.

Predominantly Muslim Narathiwat, Yala, Pattani and some districts in Songkhla have been steeped in violence since early 2004. Thai authorities have been struggling to contain insurgent-orchestrated violence in the decade since then. More than 6,300 people, mostly local Muslims, have been killed.

The military, which leads the campaign to maintain peace and order, stepped up security but sometime they confuse locals.

Last June, the Fourth Army Area asked people in the deep South not to wear helmets while driving their motorbikes in the cities – so that security officials can see their faces.

Yesterday, many motorists in Narathiwat complained that the measure exposed them to risk of road accidents. Traffic discipline cannot be enforced strictly in the deep South, as officials suspect anyone who covers his face.

Guard of honor for pilot killed in F-16 crash