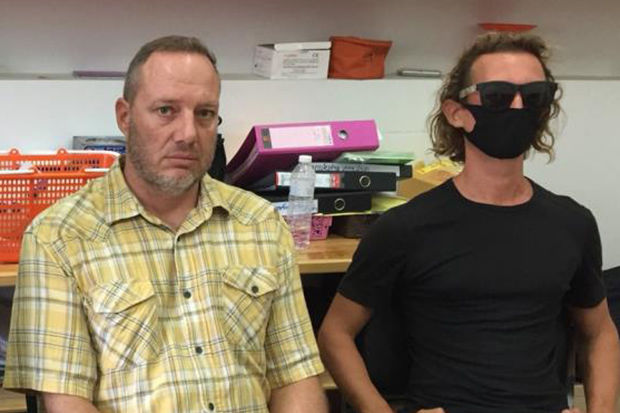 A Hungarian and Dutch man have been arrested for picking up sea animals and taking photos with them whilst diving off Koh Phangan in the Gulf of Thailand. They then posted them on social media, probably oblivious to their potentially criminal act. Police described the two as “long-stayers on Koh Phangan”. Their selfies sparked plenty of outrage from Thai netizens who take this type of eco-vandalism very seriously.

“We tracked down the suspects and identified them as Attila Ott, a Hungarian, and Francesco Simonetti, from The Netherlands. Ott is a diving instructor and owner of Pink Panther Scuba Dive Club on Koh Pha Ngan, while Simonetti is a chef at Il Barracuda Restaurant & BBQ, also on Koh Pha Ngan.”

“Salad Beach is a protected area, which makes their actions punishable by a maximum fine of 100,000 baht or 1-year imprisonment, or both.”

Police charged the 2 men with “intruding in an area designated for environmental protection”.

In the video (below), the duo are seen “tickling” marine life with their selfie stick and taking photos with them.

Department of Marine and Coastal Resources director-general Sophon Thongdee reported the pair’s misdemeanours to the media yesterday. The two had confessed to taking photos and video with sea animals at Salad Beach on Koh Phangan and then posting them on the internet. But officials were sufficiently unhappy with the duo’s antics they decided to throw the book at them.

They investigated the suspects’ travel history and fined Simonetti for failing to notify immigration officials within 24 hours after changing his address.

“Meanwhile, Kritiyaporn Khamsing, Ott’s wife, was also fined for failing to notify immigration officials in 24 hours after taking in an immigrant who was allowed to stay in Thailand temporarily.”

“If you find any offenders of marine and coastal resources, please contact call centre 1310 immediately.”