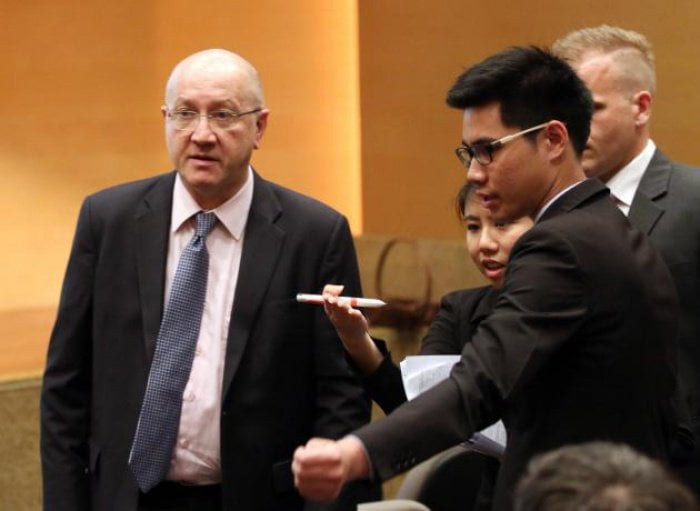 PHUKET: The provision for the use of absolute power is not without precedent and the current Article 44 of the interim charter was partly inspired by Article 16 of the French constitution of 1958, Deputy Prime Minister Wissanu Krea-ngam told foreign diplomats at the Foreign Ministry yesterday.

Deputy PM Wissanu was defending the special powers now wielded by the chief of the National Council for Peace and Order (NCPO) and Prime Minister Gen Prayut Chan-o-cha.

“Article 44 is not new to Thai people. Also, such a provision is not new to international society. Originally, we created Article 17 [during the time of Field Marshal Sarit Thanarat] – the original idea for Article 44 – but we almost copied the principle of Article 17 in the interim constitution of 1959 from Article 16 of the French constitution, albeit with some modification. Certainly they are not the same, but they are very similar,” said Mr Wissanu, who is also the legal adviser to the Prayut government.

According to Mr Wissanu, this law was invoked for the purpose of assuring continuity and stability during the reform process, including the reconciliation process.

He said five groups of people might be affected by the implementation of this law:

Those who had lost their political power after the coup;

Those who have been affected by social or economic measures imposed by the NCPO;

Those who wanted to stir up a crisis in society;

Those who want to interrupt the promulgation of the new constitution, including pushing for election for their own benefit

People who would like to express their opinion in a radical way in response to injustice from officials.

According to Mr Wissanu, the scope of this law will only cover orders issued by the NCPO after the coup up until September.

Sixty-six embassies sent their representatives to Mr Wissanu’s briefing yesterday, while ambassadors from 16 nations were present.

Only three questions were allowed and answered before the meeting ended with Mr Wissanu stating he had to leave.

Phuttipong Ponganekgul, a law lecturer at a private university who asked that the name of the university not be revealed due to the sensitivity of the situation, said it was not possible to defend Article 44 by comparing it to the French constitution.

Article 16 of the French constitution was in fact amended in 2008, something Mr Wissanu did not refer to. In 2008, Article 16 was reviewed by the French parliament and a new provision was added to impose a time frame for the use of such power. The use of such power, unlike the Thai version, can also be reviewed after 30 days. The president of the Senate or the House of Representatives or 60 senators or 60 MPs can approach the Constitutional Council to review the necessary conditions that would allow the use of the provision.

More importantly, the amended version of Article 16 of the French constitution stated that 60 days after the power has been used, the Constitutional Council will have full power to control and revise the use of Article 16 at any moment, if the Council sees the necessity to do so.

Here’s how Article 44 of the Provisional Constitution compares with Article 16 of the French Constitution of 1958:

Thailand’s Article 44 of the Provisional Constitution

France’s Article 16 of the 1958 Constitution

“Where the institution of the Republic, the independence of the Nation, the integrity of its territory or the fulfilment of its international commitments are under serious and immediate threat, and where the proper functioning of the constitutional public authorities is interrupted, the President of the Republic shall take measures required by these circumstances, after formally consulting the Prime Minister, the Presidents of the Houses of Parliament and the Constitutional council.”

Pattani men slain by officers were not linked to insurgency: panel