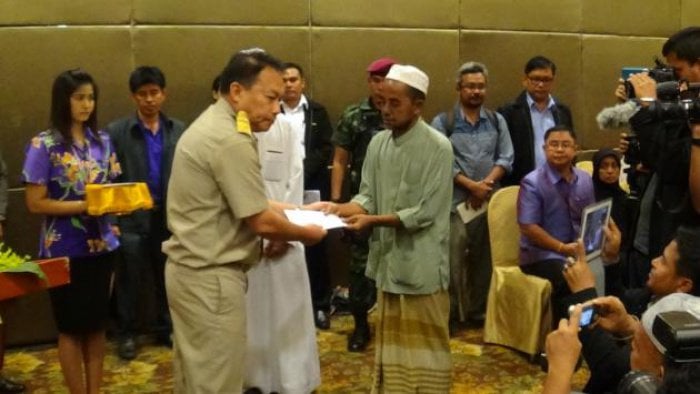 Pattani men slain by officers were not linked to insurgency: panel
The Nation / Phuket Gazette

PHUKET: the fact-finding committee tasked with investigating the killings of four suspected insurgents in Pattani’s Thung Yang Daeng district last month, said yesterday that the four men were not connected to the insurgency or unrest.

They recommended that security officers involved should go through the judicial process and that the slain men’s families be compensated as per regulations of the Southern Border Development Strategic Committee.

Pattani police chief Krissakorn Pleethanyawong said the seven officers involved in the raid would be questioned mid this month and will initially face murder charges.

Fourth Army Region chief Lt Gen Prakarn Cholayut offered an apology to the affected families and the public for incident, which he said “got out of control”.

Families of each victim were given initial compensation of 500,000 baht.

While saying there were rational grounds for the officers’ raid on March 25, Pattani Governor Weerapong Kaewsuwan, in his capacity as a member of the panel, said they could not find eyewitnesses to give information on the killing.

That was because the killings of the suspects occurred in a rubber plantation 300 meters away from the operation site. The killings were witnessed only by the officers conducting the raid, and the committee only had seven days to find out facts, he said.

The committee said that there was no evidence that clearly showed links between them and weapons found at the scene and that the justice system would have to be responsible for finding more evidence, as the raid officers would face legal action.

The committee, appointed by the Fourth Army Region chief, wrapped up its seven-day probe after hearing from people involved in the incident. The panel was made up of neutral parties that included Weerapong; Srisompob Jitpiromsri, director of Deep South Watch at the Prince of Songkla University’s Pattani Campus; and Islamic Committee of Pattani chairman Waeduramae Mamingji. It was set up following a demand for justice from local villagers.

The villagers claimed the slain men were innocent and state officers may have used excessive force.

Security officers claimed the men, who they believed were plotting attacks in the area, opened fire at them first, leading to the gunfight, which resulted in the four losing their lives.

Bonanza racetrack deemed to be on state land