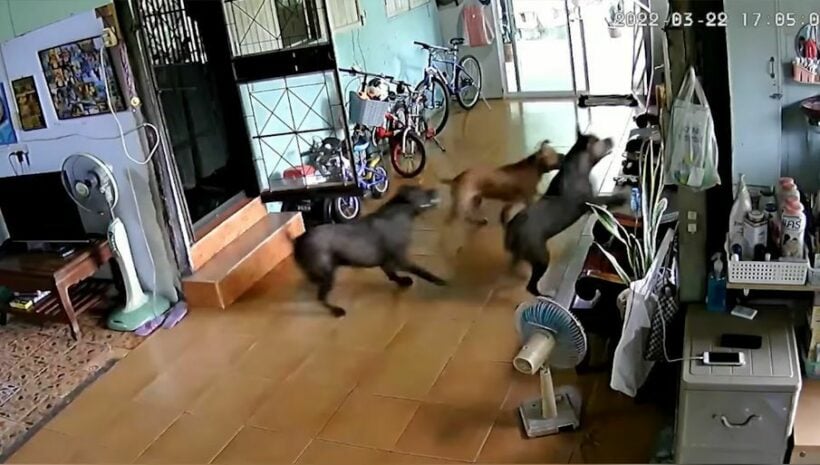 Three pit bulls from a temple broke into a family home on Tuesday in the western province Kanchanaburi causing two young boys to run to safety. The boys were not hurt but the pit bulls savagely killed one of their pet cats.

In the footage posted by Santi Kasinthuram on Facebook, the pit bulls can be seen charging into the home causing his 6 year old and 8 year old sons to flee to safety. The pit bulls’ attention turned to the pet cat which jumped out the window before the pit bulls chased it outside and killed it. Had the pit bulls not been distracted by the cat, the children could have easily been attacked.

The pit bulls are owned by a monk at a nearby temple. The temple’s abbot had previously warned the monk to keep a close eye on the pit bulls, a breed infamously known for their violent temperament. Apparently, the temple has around ten pit bulls in total.

Santi has filed a police report about the incident but doesn’t wish to press charges. Police went to the temple the next day to speak with the monk about how he can control the pit bulls better to prevent this kind of incident from happening again.

Marble-eye
2 minutes ago, 23RD said: I do agree with you Marble-eye and the point I stressed is People shouldn't take on dogs unless they can look after them and have time and expertise to train and socialise them properly. There…

Pattaya mayor donates 100,000 baht of his own money to fix children’s playground