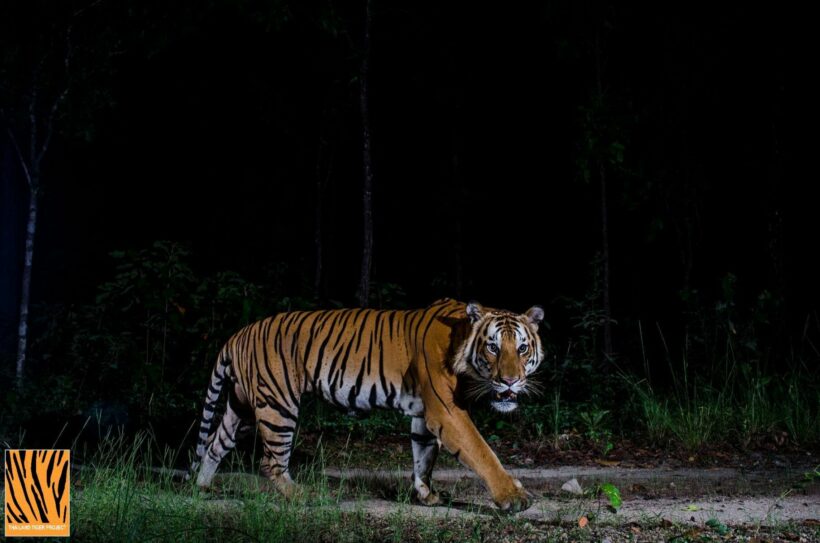 An endangered tiger known as ‘Thanakorn’ who lived in a national park in the northern province of Uthai Thani has died at age nine. The news was posted yesterday on Thailand Tiger Project’s Facebook page.

On Tuesday evening, Thailand Tiger Project received an electronic notification saying “expiration detected” linked to an ID number belonging to Thanakorn the tiger. The team weren’t sure what the message meant and thought it might mean that the tiger’s electronic collar had come loose or malfunctioned.

The next morning, the team went out to look for the tiger at Huai Kha Khaeng National Park and found that Thanakorn had passed away. The organisation did not mention Thanakorn’s cause of death, but as the lifespan of a tiger is eight to ten years in the wild, perhaps Thanakorn’s life naturally came to an end.

The team had met Thanakorn six years ago. Apparently, Thanakorn was a very stubborn tiger who wouldn’t let anyone go near him. The team said they had to “flirt” with the tiger for two years before they were able to get close enough to attach his electronic collar.

Tracking Thanakorn with an electronic collar was mutually beneficial for the tiger and the team. The team were notified anytime the tiger left the conservation area so they could employ officers to look out for and protect him.

At the same time, the collar provided the team with a lot of information which has helped them to understand more about the animal.

“In the past six years, we have learned a lot from each other. Thanakorn has provided us with many useful lessons to aid the academic understanding of these animals which will in turn benefit the species”, wrote Thailand Tiger Project.

The organisation added they are happy that Thanakorn had the freedom to live a life of a tiger, destined by nature.

Thailand News Today | Is the Deltacron variant a cause for concern?