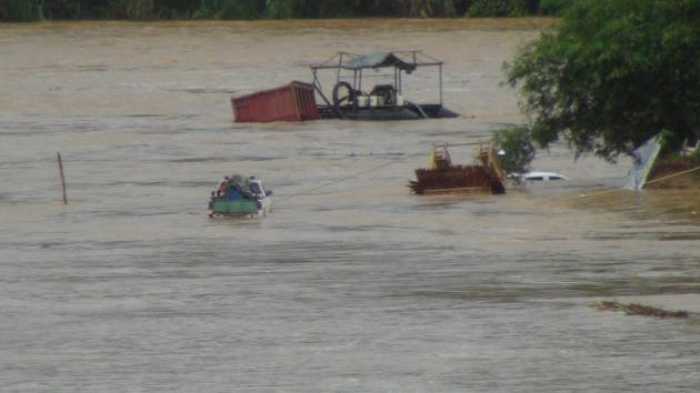 PHUKET: With flood threats raging in many southern provinces, the Royal Thai Army (RTA) has instructed all its units to closely monitor the situation and make the best effort in helping victims.

The inundation has already claimed one life in Nakhon Sri Thammarat’s Nopphitam district, where one body was found.

Soldiers evacuated people, along with their belongings, from flood-hit areas in Nakhon Sri Thammarat to safer spots.

In Tambon Krung Ching, Nopphitam district, people living along the Klai Canal were ordered to move to a local school that is now functioning as an evacuation center.

Floodwaters have swamped many areas in Nakhon Sri Thammarat’s Nopphitam, Phrommakhiri and Tha Sala districts. In Phatthalung, soldiers were busy removing water hyacinth from Lamyung Canal to help speed up the flow of floodwater out of several flood-ravaged areas in the Srinagarindra district.

At many hard-hit spots, floodwaters are now more than one meter deep, leaving 200 families struggling with inundation and reported flood damage.

“Rainfall is over 100 millimeters in various areas of Nakhon Sri Thammarat, Phatthalung and Songkhla,” she said.

She added that as rain would likely continue in the provinces, run-off water from forest zones might later hit some communities and villages.

So far, Ms Payao believed the heart of Songkhla’s Hat Yai district would be safe from prolonged flooding.

“When the rainfall is huge, floodwater can be seen in town. But water-drainage systems there should be able to drain it in one to two hours,” she said.

In the face of a serious cloudburst and flood threats, the Bantad Mountain Range wildlife sanctuary has barred tourists from playing in the water at its six waterfalls.

These waterfalls are Sairung, Prai Sawan, Ton The, Ton Pliew, Lam Plok and Kachong. They are located in Na Yong, Palian and Yan Ta Khao districts of Trang province.

“We will also close down the waterfalls within one or two days until the situation returns to normal,” Sairung Waterfalls Unit’s head Somjate Suwanwong said yesterday.