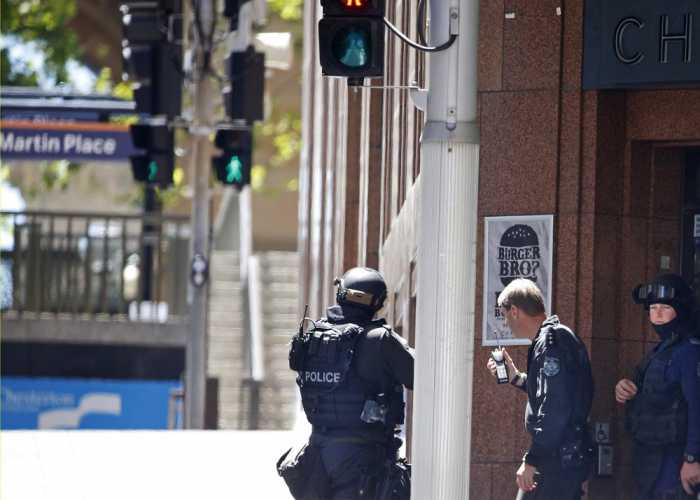 PHUKET: Hostages were being held inside a central Sydney cafe where a black flag with white Arabic writing could be seen in the window, local television showed on Monday, raising fears of an attack linked to Islamic militants.

Prime Minister Tony Abbott said he was convening a meeting of the cabinet’s national security committee for a briefing on what he called a hostage situation in Australia’s commercial capital.

Australia, which is backing the United States and its escalating action against Islamic State in Syria and Iraq, is on high alert for attacks by radicalized Muslims or by home-grown fighters returning from the conflict in the Middle East.

Live television footage showed patrons inside the cafe standing with their hands pressed against the windows. A black and white flag similar to those used by Islamic State militants in Iraq and Syria was also visible.

NSW Police tweeted: “A police operation is underway in Martin Place, Sydney’s CBD. People are advised to avoid the area.”

A couple of hundred people were being held back by cordons and the fire brigade’s hazardous unit was on the scene, a Reuters witness said.

The Reserve Bank of Australia, near the cafe, said staff had been locked down inside the building, and were all safe and accounted for.

Local media reported that the nearby Sydney Opera House had been evacuated after a suspicious package had been found. A staff member at the world-famous venue said she was still in the building but declined to comment further and police said they were still trying to confirm the incident.

Trains and buses were stopped and roads were blocked in the area, with train operators saying there had been a bomb threat at Martin Place.

Traders in currency markets said the hostage news may have contributed to a dip in the Australian dollar, which was already under pressure from global risk aversion as oil prices fell anew. The local currency was pinned at $0.8227, having hit its lowest since mid-2010 last week.

In September, Australian anti-terrorism police said they had thwarted an imminent threat to behead a random member of the public and days later, a teenager in Melbourne was shot dead after attacking two anti-terrorism officers with a knife.