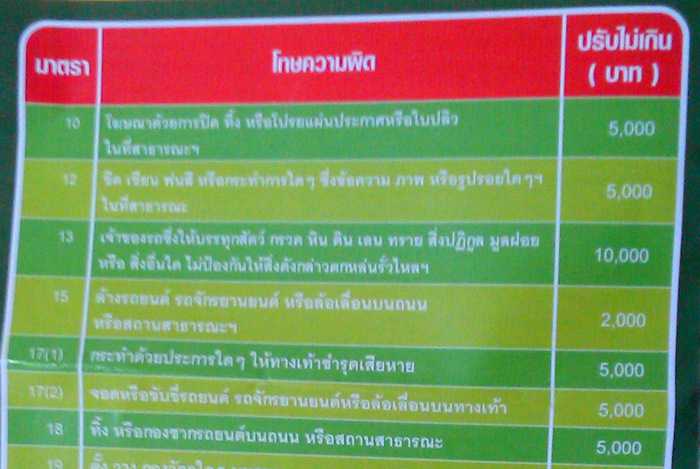 PHUKET: A Karon official has warned island-residents to obey the law or face the consequences, after a Phuket Gazette reader wrote in today about an alleged 5,000-baht fine for parking on a sidewalk.

“On Friday, I parked my motorbike near the big statue of a snake [naga] at Karon Beach, like I’ve done for the past 11 years, but this time, when I came back, I found my bike locked with a ticket,” the Gazette reader wrote in an email.

The reader wrote that he went to Karon Police Station, where he was re-directed to another office under the football stadium premises at the southern end of Karon, where he was shown a brochure listing fines for specific offenses.

“I [asked] for the supervisor and was told he would be back at 22:00. I am trying to stay calm, despite the amount, and the fact that the board nearby warns about rip tides, but nowhere mentions ‘no parking’.

“I pay and ask for the receipt. The officer says ‘come back tomorrow’.”

Weerasak Anekwongsawat, chief administrative officer at Karon Municipality, however, denied that the reader had been fined 5,000 baht – which is the maximum penalty for parking or riding vehicles on sidewalks under the Public Health Act, B.E. 2535 (1992), 17(2).

“I was not aware of the fine. However, I have spoken with our municipal officers and was told that the man was fined only 1,000 baht, not the maximum 5,000 baht,” said Mr Weerasak.

“The officer told me that the receipt has been issued and can be picked up today.”

Mr Weerasak then asked that the reader report directly to him if there is a discrepancy between the amount paid and the amount listed as paid on the receipt.

“If the receipt does not match the fee you paid, please bring the receipt to Karon Municipality and ask for me. I will take care of it,” he said.

“Our municipality officers are enforcing the Public Health Act to ensure public cleanliness and to prevent possible public danger. Please obey the laws.”

Other ordinances listed on the pamphlet that can incur heavy fines include: