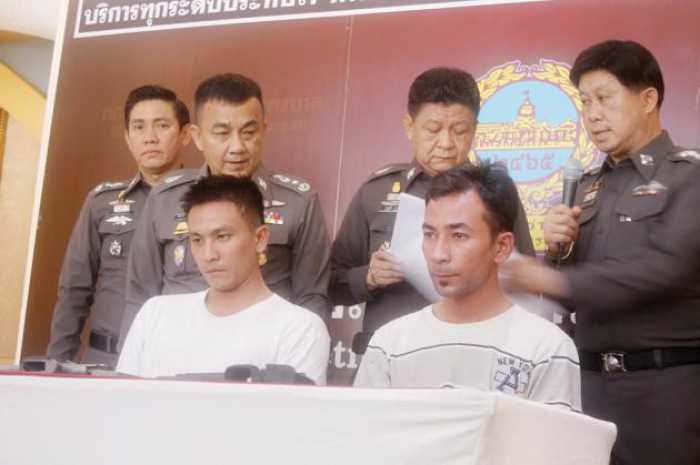 PHUKET: The roundup of accomplices of the former Central Investigation Bureau (CIB) chief facing corruption probe continues with the arrests of two civilians yesterday and the scheduled surrender today of two soldiers to face charges of lese majeste, extortion and kidnapping for claiming royal connections to collect debts by force.

The two civilians were identified as Charat Photiraj and Natthanan Thanavej. They, and a man named Chakarn Phakphoom who was arrested days earlier, had arranged talks in June to settle a 120 million baht debt. They forced the lender to write it down to only 20mn baht.

Charat said he knew nothing about the deal, as he was just the driver. He took the debtor and creditor as well as his boss to the negotiation venue and did not know what they did after that. Natthanan said he was a messenger boy.

Police spokesman Gen Prawut Thawornsiri said there were five members in this debt-collection gang, which was a cog in the alleged crime machine of former CIB chief Gen Pongpat Chayaphan.

With the arrest of the two, the number of those detained in this case has risen to 19 police and civilians.

However, the investigation is more complicated than a normal corruption case involving a police bureau, as many of the suspects maintain they have strong ties with the palace.

At least three of them have been stripped of their royally granted family name – Akharapongpreecha.

Gen Prawut has said the Akharapongpreecha men – former major Nuttapon, former sergeant Sitthisak and former Royal Household Bureau official Narong – lost their ranks and titles, while the other two, Sutthisak Sutthijit and Chakarn Phakphoom, have been in military custody since Tuesday.

Nuttapon and Narong, who now used Suwadee as their family name, as well as Chakarn were the key persons who forced the creditor to write down the huge debt, while Charat and Natthanan were standing guard outside, said Kiartnarong Chalermsook, superintendent of Prayakrai Police Station.

The suspects claimed that they had done the job on behalf of a person in a highly placed institution, police said.

They were charged with lese majeste for saying that.

Kiartnarong said the two sergeants, Thanathakorn Yasri and Theeraphong Chorchampee, would turn themselves in to the police today, but declined to say what the grounds were for them to need to report themselves.

Another suspect, Witthaya Thetkhuntod is still on the run and is armed, he said.

Spokesman Gen Prawut called on Lt Col Songrak Khunsri to report to his superior to give more information about the syndicate that he may know or is involved with.

“The officer once contacted us but has gone silent now. He might fear for his safety, but it’s better for him to report to the authorities,” he said.

Gen Pongpat faces many charges, including lese majeste and colluding with fuel smuggling.

Police have informed the mass media that he and his syndicate took bribes from a major oil smuggler in the South.

A man named Sahachai Cheasermsin is wanted by police in connection with the tax-dodging operation. He had allegedly paid for protection to Gen Pongpat for a long time.

However, many officials from the Marine Police, Department of Special Investigation and the Army, as well as attorneys, judges, officials in the judicial branch and even journalists were involved in the smuggling racket, according to a police report.

The payoffs were in kind and cash. The amounts paid to officials ranged up to 12mn baht each time. Sometimes officials were treated to meals and entertainment.

Public hearings on reform to start on December 27