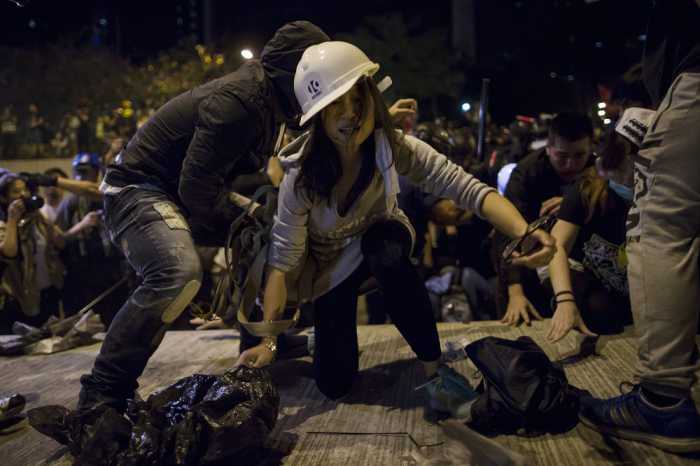 PHUKET: Thousands of Hong Kong pro-democracy activists clashed with police early on Monday as they tried to encircle government headquarters, defying orders from authorities to retreat after more than two months of demonstrations.

Chaos erupted as commuters made their way to work, with hundreds of protesters surrounding Admiralty Centre, which houses offices and retail outlets, in a tense stand-off with police. Many shops remained shut by mid-morning.

The latest flare-up blocked access to key roads and government offices were closed on Monday morning.

Riot police armed with batons and pepper spray had earlier charged protesters, forcing them off one road near government offices. Police had cleared that area more than a month ago during some of the most violent scenes since the demonstrations began in late September.

The democracy movement represents one of the biggest threats for China’s Communist Party leadership since its bloody 1989 crackdown on pro-democracy student protests in and around Tiananmen Square in Beijing.

On Monday, crowds chanting “Surround government headquarters!” and “Open the road!”, made their way to the buildings in Admiralty, next to Hong Kong’s central business district and some of the world’s most expensive real estate.

“I urge everyone to stay here until the morning to keep surrounding the government headquarters. Let’s stop the government from functioning tomorrow,” a protester clad in a black T-shirt shouted into a loud hailer.

Scores of protesters with wooden shields and metal barricades charged police as officers warned them to retreat. Police, who have been accused of using excessive force, struck demonstrators with batons in a bid to push them back.

Hong Kong media reported that 40 people had been arrested overnight.

Hong Kong’s pro-democracy protesters are demanding free elections for the city’s next leader in 2017 rather than the vote between pre-screened candidates that Beijing has said it would allow.

Police used pepper spray in an attempt to disperse the protesters, dragging several to the ground before cuffing them with plastic ties and taking them away. Scores of demonstrators held up umbrellas, which have become a symbol of the pro-democracy movement, to protect themselves from the spray.

The activists tried to reclaim Lung Wo Road in Admiralty, where police moved in on Monday, in running battles throughout the night.

Two student groups who have led the disobedience campaign had urged supporters to escalate their actions at the main protest site in the Admiralty neighbourhood.

The flare-up comes after four nights of clashes in the working-class district of Mong Kok, across the harbour from Admiralty. Police had cleared the area – one of the city’s largest and most volatile protest sites – on Wednesday.

Twenty-eight people were arrested in the unrest on Friday night and early Saturday in Mong Kok, which is packed with shops, street stalls, jewellery stores and restaurants.

The Hong Kong rallies drew more than 100,000 on to the streets at their peak. Numbers have since dwindled to a few hundred and public support for the movement has waned.